It was 1996 when an 18 year-old basketball wunderkind first stepped on an NBA court and 20 years later, he’ll close the final chapter of his legendary career. Kobe Bryant announced on The Players’ Tribune that he will retire at the end of the season in a poem called, “Dear Basketball”.

“This season is all I have left to give,” said Bryant in his poem. “My heart can take the pounding. / My mind can handle the grind. / But my body knows it’s time to say goodbye.”

In the emotional piece, the normally defiant Bryant showed a side that most weren’t used to seeing, especially on the court, but one thing is certain — his love for basketball is unmatched.

This announcement formalizes his exit when speculation surrounding his impeding retirement was turning into blasphemous criticisms of his legacy and genuine concern about his health. It was almost three years ago when Bryant first suffered a torn Achilles tendon, marking the start of what would go on to be two more tumultuous, injury-plagued seasons.

It was almost a sigh of relief, but while it was difficult to watch a legend decline in his later years, the desire and need to watch the modern-day MJ overtook any disappointment. We had to have more but time was running out.

“Deeply in love with you / I never saw the end of the tunnel. / I only saw myself / Running out of one.”

It felt that way as a fan of basketball. The Mamba mentality could overcome anything — or so we believed it could. Looking back, it can be argued that we took him for granted; the high-flying antics and what was the best one-two punch of all time. Bryant took his game to incomprehensible levels from there on. He made the argument easy in that era — he was the best player of that time, and one of the best of all time.

Five-time champion in seven Finals appearances, two Finals MVPs, a league MVP, a 17-time All-Star, and enough accolades to fill up this entire page. The most important of them all? All-time leading scorer in Los Angeles Lakers history. He stands alone amongst Wilt, Magic, Kareem, and West, and to have done it only with the Lakers makes it that much sweeter.

The amount of space in this paper isn’t enough to explain what Bryant meant to the fans, players, coaches, and NBA. His career is coming to an end. 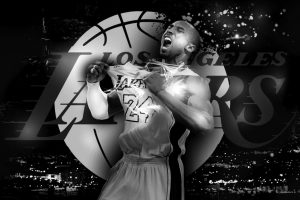