The Golden State Warriors are on a historic run with an NBA-record 22 straight wins to start the season. Coming off an incredible 67-15 record last year en route to an NBA championship, the Warriors look hungrier than ever and appear to be a legitimate threat to the ’95-’96 Bulls record-setting 72 win season. So just how has this Golden State group elevated themselves into the conversation of the greatest teams of all-time?

Right now it’s Stephen Curry’s world, we’re all just living in it. After an incredible ’14-’15 season that saw Curry solidify himself as the best point guard in the game, bringing home both the Most Valuable Player award and the Larry O’Brien trophy, the scary thing is that he looks even better this year. He’s scoring over 32 points per game, he leads the league in Player Efficiency Rating (PER) at 35.18, and he’s hitting three-pointers at a pace that will surely see him shatter his own NBA record. Unfortunately for the rest of the NBA, there doesn’t appear to be anybody on the planet right now who can cover Stephen Curry, and you can expect it to stay that way for quite some time.

With all the attention on the reigning MVP, some may be overlooking Draymond Green’s rapid development into one of the best players in the NBA. While Green doesn’t score at the rate of your typical NBA superstar, averaging only 13.3 points per game, his defensive versatility and ability to stuff the stat sheet separates him from his peers. On the season, Green is leading the Warriors in rebounding and assists, with 8.5 and 7.2 per game respectively, as well as averaging over a steal and a block per game. His unique combination of size, strength, speed, and skill allows him to guard from the one to the five offering unprecedented defensive versatility. Along with his impressive stat lines, Green offers so many intangibles on the court through his hustle, grit, and intuition. While it’s easy to be enamored with Chef Curry at the moment, don’t let the contributions of Draymond Green go unnoticed.

It can be argued that Golden State has the best starting five in the league. However, much of their success hinges on what is by far the best bench in the NBA. The Warriors second unit of Shaun Livingston, Leandro Barbosa, Andre Iguodala, Marreese Speights, and Festus Ezeli could start as a team in the Eastern Conference and probably make the playoffs. They’re THAT good. Even their last men off the bench, like Brandon Rush and Jason Thompson, are quality players who have accepted and embraced their smaller roles for the opportunity to be a part of a championship caliber team. Often NBA teams find themselves relying on their superstar to carry them; the LeBrons, Kobes, and Carmelos of the world. The Warriors, on the other hand, have a strong, cohesive unit of quality players who have all bought in to their system and will do everything in their power to help the team win. It may be cliché but teamwork, does in fact, make the dream work.

When people hear Golden State they immediately think of offense, and that’s understandable. They lead the league by far in scoring at over 115 point per game and it seems like Curry is hitting 20 three-pointers a night. However, if you look closely, it’s the defense that has elevated this team to the next level. The Warriors led the league last season in Defensive Efficiency Rating and opponent’s field goal percentage. This year, they have remained top five in both categories and continue to frustrate opposing offenses. One of the main reasons for their success defensively is their unique size across the board allowing them to defend numerous positions. With the exception of Curry, all the Warriors starters are at least 6’7, allowing them to effectively switch on defense without creating many mismatches. In today’s day and age where it’s all about offense across the sports world, Golden State is once again reminding everyone that defense wins championships.

So there you have it, the blueprint for the Warriors’ outstanding start. We’ll see how long they can keep it up as they continue to chase history in pursuit of the all-time NBA-record 72 win season. 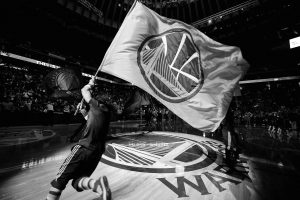