Last year, the Kansas City Royals were one win away from being named World Series champions. This year, they took home the crown.

With the Royals up in the series three games to one, Game 5 for the New York Mets was a must win. The Dark Knight, Matt Harvey, was sent to the mound against the Royals’ Edinson Volquez to keep the Mets’ World Series dream afloat.

Throughout the final month of the regular season, Harvey was entangled with the 180-innings cap controversy. In his first season coming off Tommy John surgery, Harvey steamrolled over that limit and ended the season with 216 innings. All throughout the playoffs, Harvey’s innings limit was seemingly meaningless.

In what would be his final start of the 2015 post season, Harvey was dominant through eight innings. Edinson Volquez pitched respectably, tossing 90 pitches through six innings, giving up two hits and two runs.

With the Mets up 2-0 headed into the ninth inning, Mets manager, Terry Collins, planned on handing the ball over to closer Jeurys Familia. However, Harvey convinced Collins to keep him in the game.

Collins let Harvey start the ninth inning, but things went from good to bad for the Mets in the blink of an eye. Harvey started the ninth inning with a leadoff walk to center fielder Lorenzo Cain. Cain stole second base before first basemen Eric Hosmer doubled, cutting the Mets lead to 2-1.

Familia surrendered the game tying run on a ground ball out to first base. Mets third baseman, David Wright, fielded a slow roller hit off of the bat of Royals’ catcher Salvador Perez and fired the ball to first base for the second out. As Wright threw, Hosmer broke for home plate. First baseman, Lucas Duda, threw wide of the catcher, allowing Hosmer to score.

Familia blew three saves against the Royals — Games 1, 4, and 5. This was the first time a reliever has blown three saves in a World Series. Familia did, however, rebound to throw a perfect 10th inning.

The game remained tied going into the 12th inning, but things eventually fell apart for New York. Mets’ reliever, Addison Reed, surrendered a leadoff single to Salvador Perez. Jarrod Dyson was inserted into the game as a pinch runner and stole second base. Dyson advanced to third on a productive ground ball out, and ended up scoring on a single by pinch-hitter Christian Colon. The Royals broke the tie and led the Mets by a score of 3-2.

Collins summoned veteran pitcher, Bartolo Colon, to the mound to try to limit the damage. However, the floodgates opened. Doubles by shortstop, Alcides Escobar, and centerfielder, Lorenzo Cain, brought home four more runs, ultimately sealing the victory for the Royals. Mets fans headed for the exit as Royals fans awaited the ensuing celebration. The Mets did not have any miracles rolled up their sleeves, and were shutout in their last turn at bat. Royals closer, Wade Davis, struck out Wilmer Flores for the final out of the 2015 World Series, sending the Royals storming out of their dugout in celebration.

With their victory, the Royals ended their World Series championship drought, with their first title in 30 years. The Mets last won the World Series in 1986. That being said, next year marks 30 years since the Mets last title. Until next season… 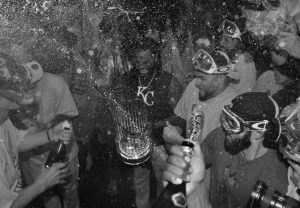