Everybody is intrigued to find out where Kevin Durant is going in the offseason, how much longer Kobe Bryant will play, or if Derrick Rose will play more than 50 games this year. Here are three under the surface storylines to look for during the 2015-2016 NBA season:

1.) Celtics could make a playoff run and still get the first overall pick

Two years ago, Joe Johnson and Deron Williams seemed like one of the best tandems in the NBA. Because they were so talented, Brooklyn Nets owner Mikhail Prokhorov felt obligated to make a trade that would help them win immediately. Insert the Boston Celtics. The trade between the Celtics and Nets involved nine players including NBA champions Kevin Garnett, Paul Pierce, and Jason Terry.  At the time, the Nets were delighted to gain such veteran leadership, but after a massive fallout and zero titles, two years later the Nets are in shambles.

However, the Celtics are in great shape. They made the playoffs last year with the league’s fifth youngest roster and garnered 15 more wins than the previous season. Oh and still have two of the Brooklyn’s 1st-round picks in 2016 and 2018 – including a pick swap in 2017 – as part of the trade from 2013. Before the season started, only three teams had a lower over/under win total than the Nets and they have not done anything in this young season to silence the doubters (started 0-7). The Nets stink, and the possibility of tanking to get a better player in the draft is gone because their pick is in the hands of Boston. The Celts are looking to jump to the upper echelon of Eastern Conference, and with the help of the Nets (and some ping pong balls), they might get the number one pick to help them out.

2.) Possible* for the tanking 76ers to have four 1st round picks in next year’s draft

The Philadelphia 76ers have not been winning a lot lately. They have embraced the philosophy of ‘tanking’ as a way to get high draft picks and enter the crapshoot that is the NBA Draft. According to RealGM.com, between now and 2021, the 76ers have ten 1st-round picks and twelve 2nd-round picks, both the most in the NBA.

3.) Guys who are in contract years going for stats instead of wins for the cap jump

Like the NFL, the NBA is a salary cap sport. Each team’s salary cap number is a percentage of the overall Basketball Related Income. Because the NBA and its television partners recently agreed to a new, more lucrative deal, the league’s Basketball Related Income is about to take a huge leap. Starting next offseason, each team’s salary cap number will progressively increase, allowing them to spend more money. NBA players know about this trend and are looking to cash in. This likely “money grab” creates the possibility of players bolstering their individual statistics to get a bigger and better contract in the offseason. This is even more likely if a good player is on a bad team. Some All-Star caliber players who will be free agents in the offseason and whose teams are not title favorites are all over the league. Some notable future free agents are: Al Jefferson, Mike Conley, Nicolas Batum, Roy Hibbert, and Jordan Clarkson. 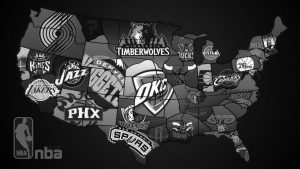