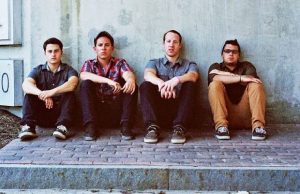 The upstate New York pop-punk scene landed another new album for the month of October when Pentimento released their sophomore LP I, No Longer Friday the 23rd through Bad Timing Records. The band has improved drastically since their 2013 full-length Pentimento and their Inside the Sea EP with better lyrics, emotive falsetto from vocalist Jeramiah Pauly, and melodically driven guitars that transcend beyond the traditional pop-punk sound. This album shows confidence and maturity. One can be sure I, No Longer will bring about bigger gigs for a group finally breaking out of the snow capital of the state.

I, No Longer, with 12 tracks that follow the process of losing a person you love, reels the listener in with the very confrontational opener “Small Talk For Strangers”. The short piece is an emotive burst of guitar that blends into the second track, “My Solution is in the Lake”, both reflecting on the awkwardness of moments that come just after a breakup, where you treat the one you just loved as a stranger, and when you cannot bear to go anywhere you both made memories.

The third song on the album, “Sink or Swim”, made Alternative Press’ “14 Songs You Need To Hear from October 2015” and acts as a pick me up from the accusatory opening tracks with very conventional pop-punk lyrics.

“Clever Reason” is much more weighty, asking the tough questions that come after someone leaves you. This light track resembles music by the acoustic duo This Wild Life, a contrast from the remainder of the album that has a more Have Mercy and Citizen feeling at times.

“Stuck Forever” is very upbeat though it continues the thoughts from the last track about feelings that remain after separation. The album takes an epic turn here and in the songs after, which are slower and include some screamed words that send chills down the spine. With “Got My Answer” and “Again”, the album places more emphasis on the subject’s personal method to dealing with his loss.

“Gateway” follows with powerful vocal harmonies that are very Blink-182-esque. In this track especially, the instruments act as support for the vocalist and his story.

“Tiger Eye” is an extremely emotional track that differs from the rest in regards to topic as it alludes to the loss of the subject’s father.

“Slow But Sure” and “No Matter What” return to blaming the person that left of making poor decisions and of really messing up the subject, who can’t help but go back to what he is comfortable with.

I, No Longer concludes with “Tell Me”, a ballad of affirmation that the relationship is finally over, and it is time for the subject to move on. The last line is one of the most potent of them all because it is making a declaration that is hesitant even after everything that went down: “Please let this be the end.”

From the start of my first listen of I, No Longer, I was hooked, and in the end I know the album hit me in all the right places. The lyrics are refreshing and worded just right. It is necessary to listen to it all the way through as the tracks blend into one another, like one complete thought.

Pentimento is a group that is determined to share their music, which is very memorable and will keep you coming back for more. Find I, No Longer on Bandcamp for only $5 and go see Pentimento play at Gorham Brothers Music in Syracuse this Thursday, November 5!