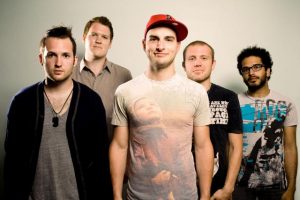 State Champs, a five-piece pop-punk band from the capital region, released their highly anticipated sophomore album, Around the World and Back on October 16. Following their 2013 release of The Finer Things, the new LP provides a poppier twist on the band’s original sound. Though not groundbreaking for the genre, Around the World and Back is catchy no matter how many times it spins, and it will undoubtedly gain fans in the new scenes that they have tapped into this year.

It’s a wonder that the quintet had any time to record the album with the amount of touring they did after the release of The Finer Things. First, they embarked on a very genre-diverse winter 2014 tour with We Are The In Crowd, Set It Off, William Beckett, and Candy Hearts. Shortly after, the band toured internationally for the first time with The Wonder Years and A Loss For Words. They even played the 2014 Vans Warped Tour on the Kevin Says Stage, sometimes playing the main stage. In the fall, they joined labelmates Handguns, Forever Came Calling, and more on the Pure Noise Records tour which had a very different aesthetic from their spring 2015 tour with All Time Low, a band that is much more pop than punk. That led to their gig supporting the radio-driven pop-punk band 5 Seconds of Summer in Australia this past June. There’s no doubt that touring with All Time Low and 5 Seconds of Summer had a great influence over the evolution in sound for State Champs, with Derek Discanio’s vocals smoothing out which will appeal to a wider audience. Nevertheless, State Champs is still one of the better pop-punk bands in the scene that will continue to expand upon and realize their potential thanks to Around the World and Back.

The album opens up with excellent and fast-paced drumming by Evan Ambrosio. “Eyes Closed” is a song you could see yourself singing along to live as an opening piece for the set. “Secrets” is a syllable driven tongue-twister with unique lyrics characteristic to pop-punk. Around the World and Back highlights how Derek’s voice has matured from shouty to a more smooth and melody driven entity. “Losing Myself” has one of the best lines off the album, “We attract what we’re ready for,” which goes to show that the album is about confronting the best and worst in life.

The latter half of the album is rooted more in the pop-punk tradition of heavier guitar riffs. Track nine for which the album is named, “Around the World and Back”, shows the band’s mastery of the acoustic song and provides a rare duet for the genre. Derek’s voice complements Ansley Newman of Jule Vera, and the natural dynamic between male and female vocals is evident.

The album concludes with two more songs, “Breaking Ground” and “Tooth and Nail”, which are largely about breaking out of one’s hometown to show the world what you’re made of.

I like the upstate references in this song because it shows State Champs’ gratitude for their scene.  Being from upstate, it works with my own mindset. “There’s more to me than where I came from” is a line that has been echoed by college students everywhere. Around the World and Back comes full circle in connecting what is important about home as well as the world at large.

Take a listen to State Champs, and go see them on tour as an opener for The Wonder Years, Motion City Soundtrack, and You Blew It! If you ever get the chance, drive up to Albany to see them, because their hometown shows are one of a kind.