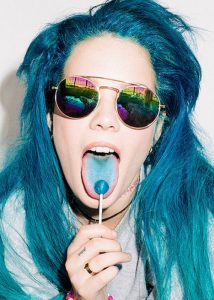 In recent years, pop music has received a facelift as edgier acts have taken the stage − from our favorite twerker, Miley Cyrus, to Katy Perry and her dancing sharks. More risks are being taken by the faces of pop than ever before. Musically, indie-pop acts like Lorde are taking chances with not only their image, but also with their musical style, electing for a catchy and intriguing, yet darker sound. In the same league of Lorde is Halsey, self­-described as an “anti-­pop” singer/songwriter from the Big Apple.

Halsey, the moniker for 21 year old Ashley Frangipane, has hit it big with her new album BADLANDS only a year after signing to her label, Astralwerks, known for their electronic and dance music. Released on August 28, BADLANDS charted at number two in the iTunes Overall Top Albums list as well as at number two on the Billboard 200. According to Nielsen SoundScan, she moved 97,000 copies of BADLANDS in its first week, a huge number in the age of music streaming. This art-pop record deserves all the success it has received, and so does its hard­working mastermind.

Similar to many other young faces in pop culture, Halsey got her start on YouTube with a Taylor Swift parody video in 2012 called “The Haylor Song”. From there, she released her own work on Soundcloud and was signed in 2014 to Astralwerks. Halsey has been playing the acoustic guitar since age 14, and at the time she was signed, she was attending community college for creative writing and using music as a way to make ends meet. Prior to the release of BADLANDS, Halsey made an appearance at the 2015 SXSW Festival, opening for Imagine Dragons on their summer tour. She has gained over 1.5 million followers between her Twitter and Instagram accounts and enjoys interacting with her fans. Halsey has gained mainstream media attention for reasons beyond her music.

Halsey is an artist who is honest, self­-aware, and very open about her personal life in interviews.  In an article published by Billboard, she addressed being biracial, bisexual, and bipolar, and how those qualities have had a great effect on her music. She moved around a lot as a daughter of teenage parents, and their taste in music inspired Halsey to make her own music.  Her father was into old school hip-hop, and her mom loved alternative rock and grunge.

BADLANDS was released with two different versions to the album − an 11-track regular release and a deluxe album that lists 16 songs. The latter has two standout tracks, “Strange Love”, which sports Halsey’s “I don’t give a f–” attitude; and “Gasoline”, an unpredictable tune that manages to start with an organic sound, progress into an intense chorus, and return to the natural, mellow feel. Halsey made an understatement in calling her work an “angry female” record − it is also a

conceptual album about a fictional dystopian society. The world she created − the Badlands, a place of indulgence in the middle of the desert − was actually a metaphor for Halsey’s state of mind while writing and recording. Halsey’s voice is pretty and pure enough to act as a contrast to the dark and sexually-charged lyrics which she writes and backed up by innovative, electronic beats. The album starts with more radio­friendly, hip­hop inspired and danceable songs, including the two singles, “Ghost” and “New Americana”, but progresses into slower, dissonant, risky, and trance-like tracks. Halsey writes with a lot of imagery and emotion, and she does not beat around the bush when she sings about sex and passion.

I was impressed by BADLANDS and would recommend Halsey to fans of indie-pop and alternative rock, though I would have been floored by the record if Halsey left her vocal comfort zone and took more gambles with her voice.

Catch the blue­-haired phenomenon as the headliner of The Badlands Tour in October, or opening for The Weeknd this November.