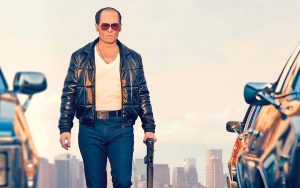 Black Mass straightforwardly and unapologetically leaves out the charm and romanticizing that is typically seen in mob movies to deliver a tense, raw, icy experience that better captures the unreal lunacy of these criminals’ lives. Johnny Depp has returned to once again play a hand in a life of crime as he famously did in phenomenal films such as Donnie Brasco and Blow. Now, he’s James ‘Whitey’ Bulger, head gangster of the Irish-American Winter Hill Gang of 1970s South Boston. With a star cast, “biopic” label, 75 percent on Rotten Tomatoes, and 68 percent on Metacritic, this movie draws in a crowd.

The film mostly stayed true to Dick Lehr’s bestselling nonfiction book of the same name which recounted the perversions of the real-life gang. The title is an expression that explains a corruption of Catholic mass and serves as a metaphor for Bulger’s part in polluting the FBI. Lehr said that, “It plays in the idea of an unholy alliance.” This arrangement was made possible by Bulger’s childhood friend turned FBI agent, John Connolly (Joel Edgerton), and inadvertently by his brother William (Benedict Cumberbatch) who became an influential senator. Bulger became an informant for the FBI in an attempt to bring down the Italian Mafia and, more specifically, his enemies, the Anguilo Brothers. In return, his crimes would be excused as long as he did not commit murder. Although, it was during this unusual union that he was most powerful and became the most illegally active.

The suspense of the movie is accomplished through Bulger’s calm and (falsely) caring demeanor which at any moment could erupt into menacing interrogation or violence. Be warned, there are many ruthless murder scenes which may leave one’s limbs stiff and mouth agape. Even still, they were a step away from the brutality of the true events because of what was not shown.  For example, the burials of those bodies were always stripped of teeth, fingers, and feet to make identification more difficult. What is perhaps even more shocking is the fact that these mobsters did not adhere to the “true gangster’s code” of not killing women or children which has, at many times, given criminals some shred of dignity in other movies. Bolger’s strangling of his employee’s stepdaughter was featured, and in real life (though exempt from the film), he put a gun in a baby’s mouth as a scare tactic for a mother whose business he wanted to reap the profits of.

Ironically, the film’s narration is provided by past associates of Bulger who all opted to “rat out” the rat himself in an attempt to lessen their sentences. These confessions all do a good job at telling the story. Agent Connolly and Bulger are perplexing characters as shown by a description of their playing “cops and robbers” together growing up; it was said that no one could tell who was performing which role. Connolly was sometimes the charming husband or the adulterer, the proud cop or the corrupted peer, while Bulger was sometimes unexpectedly humorous as well as a devoted son, townie, and father.

Black Mass comes off very strong and is sprinkled with interesting facts, such as Bulger’s past at Alcatraz and participation in experimental LSD trials. After evading the police for 16 years, he was caught and convicted for 19 murders (how many more that were committed is unknown). In some ways, the movie lets the actions speak for themselves, relies on its narration, and does not achieve the depth of some other legendary gangster movies. Black Mass is not for the faint of heart, but it does provoke more curiosity of human nature and rightful disgust for often glamorized criminals than many other mob films do. Most people will be compelled to watch it again, but once is the least that it deserves.