Of the many gems Oneonta nightlife has to offer, Funk Night at The Black Oak Tavern is one for the books. Started 13 years ago by Music Industry Professor Jeremy Wall, the funk bands are made up of some of the “finest student musicians on campus,” said Wall. These students are selected through an audition process on their particular instrument and showcased in either of the two funk bands.
The first is a jazzy and groovy instrumental band composed of Andrew Pratt on drums, Russel Somer on guitar, Frank Ciccariello slappin’ the bass, Zachary Lauzon on the trombone, Brandon Liff on the tenor saxophone and Professor Jeremy Wall himself on the keys who also plays for the second traditional R&B funk band.
The second band is made up of Mike Rex on drums, Brian Gipson on guitar, Jackson Beveridge on bass, Zachary Lauzon on trombone, Rob Ayala on trumpet, Gabrielle Feliciano on alto saxophone and vocals and Eliza Shillieto on lead vocals.
Every other Wednesday night you can hear the music resonating up and down Water Street from the Black Oak Tavern. Whether it’s a modern take on Charles Mingus’ “Moanin,” to “Uptown Funk,” a sure crowd pleaser, the band always puts on a clean and solid performance.  Although the band mainly does covers, some songs they performed allow them to open up into a free form jam session.  They also perform an original arrangement by Wall, who has been writing, composing and performing music for decades.
The funk bands prove themselves a timeless venture as well as the Black Oak Tavern itself, which first opened its doors in 1974 and remains a popular venue today. Music written 20, 30 or even up to 70 years ago can still prove itself relevant in today’s funk and jazz culture, and the funk bands here at SUNY Oneonta do an extraordinary job of bringing it back around for us to hear. 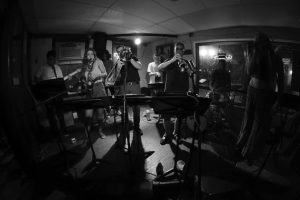