There are very few players, let alone freshman, that have played better than Jahlil Okafor. Also in the discussion for the Player of the Year award, Okafor takes home this trophy. Although D’Angelo Russell of Ohio State put up a fight, Okafor has been absolutely dominant.

Okafor has averages of 17.7 points and 9.0 rebounds, on an incredible 66.9 field-goal percentage (second in the NCAA). He is also within the top-10 in several other categories. He has clearly been the best player on his team, leading the Blue Devils to a number one seed and a 29-4 overall record.

There is no team this year that has been better than Kentucky. While the talent assembled in Lexington is similar to that of the Justice League, John Calipari has played probably the biggest role in their success. With an unorthodox style of coaching, Calipari has managed egos and playing time, even with his new style of substitutions, using a platoon-style switch.

Coaching goes beyond the 34-0 regular season record and the SEC Championship that Calipari has amassed. Within college coaching, you must be able to recruit, and that is the area where Calipari exceeds. This season he brought in nine McDonald’s All-Americans. Calipari has taken his unorthodox, no-nonsense approach and turned this unit into a team that will go down in history.

The biggest reason for Kentucky’s success this season has been their stalwart defense. Anchoring their defense is Willie Cauley-Stein, his length and athleticism alters opponents shots every game.

He averages 1.6 blocks and 1.3 steals while being the anchor on the best defensive team in the nation, holding teams to 54 points-per-game (fourth in the NCAA) on 35.5 field-goal percentage (first). His defensive impact goes beyond that stat-line. Being that dominant of a player deters opponents from challenging him while taking pressure off his teammates.

Knicks fans, embrace! Jahlil Okafor is projected to fall into your laps in the NBA Draft as he  is seen to be the most NBA-ready player in college basketball. Although that may be the case, Frank Kaminsky has been the better college player this year.

His resume stands out over Okafor’s because Kaminsky has done more with less. While Sam Dekker and Nigel Hayes both provide an offensive spark, the offense runs through Kaminsky. Duke has had the luxury of having Tyus Jones as Okafor’s running mate, leading Duke to victory. Kaminsky is a better overall player, a threat throughout the entirety of the game. Okafor’s struggles from the free throw line (51.1 percent) and on defense is where Kaminsky is above-average to excellent (75.9 percent, 1.6 blocks, and 1.0 steals).

Kaminsky has led the Wisconsin Badgers to a Big-10 Championship as well as being a number one seed in the NCAA Tournament. Kaminsky is having a season to remember dominating across the board. 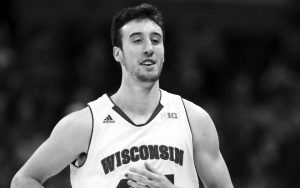