When Chip Kelly took over as Philadelphia Eagles head coach in 2013 there was plenty of excitement within the organization and fan base. His fast paced offensive scheme at the University of Oregon provoked the interest of many teams. But the Eagles ended the year 10-6 and fell short of the Super Bowl, which was deemed the ultimate goal.

The Eagles headed into the 2014 season with similar expectations. They had Lesean McCoy, the NFL’s leading rusher in 2013, and were entering their second year under Kelly’s offense. But they were to do it without star wide receiver Desean Jackson, who signed with the Washington Redskins after being released by the Eagles. This was one of the first big question marks of the Kelly era. Stating that character issues played a major role in the release of Jackson made sense, but simultaneously raised eyebrows when fellow receiver Riley Cooper was seen on a video camera yelling racial remarks at a black security guard while attending a country concert at Lincoln Financial Field. Yet, he was still kept on the roster.

The Eagles finished 2014 with a record of 10-6 once again. However, in what turned out to be a very competitive NFC East that was not good enough for first place. The Eagles started the 2015 offseason with a bang by not re-signing Jeremy Maclin, who was the team’s leading receiver. Maclin compiled nearly 1,400 yards and 10 touchdowns during his final season with Philadelphia.

Then, the trade that shook the NFL world occurred. The Eagles traded Lesean McCoy to the Buffalo Bills for linebacker Kiko Alonso, who is young and very promising. But Alonso has not played in over a year due to a serious knee injury. Acquiring a player like Alonso is not a bad move, considering the Eagles’ lack of depth at linebacker. But giving up arguably the best running back in the league for him was quite a stretch.

Then in another questionable transaction, the Eagles traded starting quarterback Nick Foles to the St. Louis Rams for quarterback Sam Bradford. Foles is not an elite quarterback by any means, but two years ago he had a stretch of games where he passed 20 touchdowns and zero interceptions. While Bradford is coming off back-to-back knee surgeries to end his last two seasons, he has not shown yet in his career that he can be a healthy full time starter. It starts to raise the question: does Kelly think he can win with any players, proving to be his system that was successful?

But this is not saying that he has only made bad decisions. He recently signed Demarco Murray, last year’s league leading rusher from the Dallas Cowboys. But that was the day after already signing free agent and injury prone running back Ryan Matthews who spent his entire career in San Diego. What is going to be interesting to see come draft day is if the Eagles move up and make a move for defending Heisman Trophy winning quarterback Marcus Mariota, who was Chip Kelly’s star player while at Oregon together.

One thing that is certain is Chip Kelly is always keeping everyone on their toes, and we will all be watching very closely come draft time and next season to see if Kelly was just smarter than all of his naysayers. 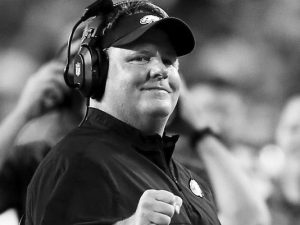