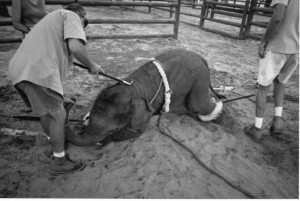 When you hear the word “circus,” one of the first images that pops into mind might be little men in bright red suits with mustaches, hopping around on elephants’ backs and leading tigers to jump through rings of fire with ease. While watching this zany and whimsical spectacle, you probably haven’t considered the dirty work that goes on behind the scenes—the raising and maltreatment that goes into using the elephants as a tool for the final production. The amount of money, effort, resources and space required to incorporate this illusion of happy animals born to play their part in this show is quite daunting.
At 10 feet tall, the 11,000 pound Asian elephant has existed as a domesticated animal for thousands of years. They have the largest brain of any land mammal, and are one of the three animals who can recognize themselves in the mirror. In the wild they live in familial packs and travel in herds, walking nearly 40 miles each day. Yet today, less than 40,000 of these robust and steady creatures remain. After over 140 years, the Ringling Bros. and Barnum & Bailey Circus have finally put a halt to their use of elephants in performances. Some of the techniques forced upon their elephants included balancing on hind legs with their front legs perched on top of one another, forming a conga line and balancing on a rubber ball. When they aren’t performing, the elephants are shipped across the US in tiny, dark wooden boxcars. Yes, the illustration of elephants transported in cramped boxcars in Disney’s classic animated film Dumbo holds some truth. The elephants spend their entire lives in chains and shackles, or being transferred from one circus location to another. They are frequently poked and probed with an ankus, a metal hook-like tool designed to control any unwanted arousal. They are also prohibited from socializing or being able to roam freely.
The exploitation and inappropriate use of elephants in the circus business is infamous and often overlooked. The fourth amendment of the US Constitution states that those who own nonhuman property have the right to purchase, sell or treat their goods in any way they please. With poorly enforced animal protection laws, these elephants are objectified and used as machines in the so-called spectacular display of the circus.
In 2014, The Humane Society of the United States and PETA sued the Ringling Bros. for maltreatment of elephants used in the circus. While the animal welfare groups lost $16 million, the American public began to turn their noses up at the circus, disapproving of the fact that elephants are abused for the sole purpose of childish entertainment. Because of the build up of negative pressure and disdain from angry ex-circus dwellers, Ringling Bros. have promised to retire all of their elephants by 2018. The Ringling Bros. claim they will send their 13 traveling Asian elephants to a conservation in Florida. However, they plan on continuing to incorporate tigers, lions, horses, dogs and camels into circus shows. Perhaps it would be best for us to stop supporting the circus business altogether; sooner or later they will run short of fresh comedic ideas, and hopefully before several animal species become extinct.