New York Rangers players, coaches and fans collectively held their breath on January 31 at Madison Square Garden. In a freak play against the Carolina Hurricanes, starting goalie Henrik Lundqvist took a puck to the neck after his neck guard was accidentally lifted by the stick of Rangers defenseman Ryan McDonagh. Lundqvist stayed down for several minutes eventually getting up on his own to the roar of the Ranger faithful. He stayed in the game as the Rangers went on to defeat the Hurricanes 4-1 and won their next game two days later against the Florida Panthers, 6-3.

But that game against the Panthers would be the last Lundqvist played for a while. After, it was revealed that he tore a blood vessel in his neck, forcing him to miss over a month of hockey.

With one of the best goalies in the National Hockey League going down, Ranger fans were nervous for what would come next. Cam Talbot has been revered as one of the best backup goalies in all of hockey, but could he handle the pressure of being the number one goalie, night in and night out in the heat of a playoff race?

It turns out he can.
Since Lundqvist went down Talbot has compiled a record of 15-3-3, with a 2.23 goals-against average and a .945 save percentage. He has won important games against the Nashville Predators, Chicago Blackhawks, New York Islanders and Washington Capitals, all of whom are in a playoff position as of now.

It has been a pretty impressive feat, considering that Talbot was signed as an undrafted free agent out of the University of Alabama-Huntsville, not exactly known as a hockey school. He has looked calm in goal, controlling his rebounds and never giving up on a play. His most impressive save came in a game against the Capitals on March 11, while the Rangers were down two men. In front of the net, Capitals forward Joel Ward made a pass across the crease to Nicklas Backstrom who fired a one timer into what seemed to be a gaping net. But in a move of desperation, Talbot stuck out his glove and robbed Backstrom, catching the puck before it crossed the goal line.

On March 17, it was announced that Lundqvist could finally start full practices with the team, the next step before he gets to play in regular season games. When he comes back, will there be a goalie controversy?
No.

As well as Talbot has been playing this is still Lundqvist’s team. He is the goalie who has consistently led the Rangers to deep playoff runs and it will still be his job when he is ready to come back. This season Lundqvist has gone 25-11-3, with a 2.25 goals-against average and a .922 save percentage. But when Lundqvist returns the Rangers will have the same confidence regardless of who is playing in goal.

This leaves an interesting situation for Talbot. He has one more year on his contract and there are teams who are interested in obtaining a new goalie. The Toronto Maple Leafs and Edmonton Oilers have struggled in the goalie department for the past few years. It may be in the Rangers’ best interest to trade him in the offseason for a draft pick in order to get something in return for his inevitable departure.

Talbot has done a solid job keeping the Rangers on track for yet another playoff berth in hopes to make it back to the Stanley Cup Finals for the second year in a row. 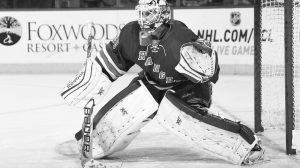