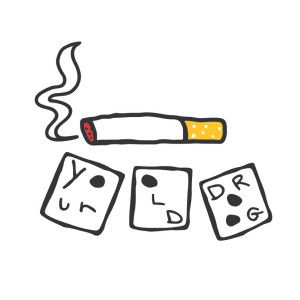 A reputation in the hip-hop game is something that is crafted through your music; becoming known as a lyricist, an innovator and somebody with a great flow takes time to acquire. Often, artists find themselves being compared to legends. But this takes time–and rightfully so. Yet imagine not only being compared to Nas, but getting accused of being his alter ego under the alias name Your Old Droog?
Droog, a Russian word that means friend, could be translated by conspirators to “old friend Nas.” Or instead of supporting this conspiracy theory, the name Your Old Droog could indicate an admiration for the Anthony Burgess novel A Clockwork Orange.
After making noise with his first release on Soundcloud, Droog eventually came out of obscurity, revealing himself to a New Yorker reporter as a 25-year-old white male from Brooklyn. The smooth, deep voice, stylistic similarities and individualistic sound may have lead the hip-hop heads in their thirties to believe that Nas had created some sort of alter ego, but this was debunked after Droog’s reveal. Regardless of what you want to believe, Droog is certainly an anomaly in today’s hip-hop, where monotony and repetition are all too common.
Puns are in abundance in his lyrics, which differentiates him from Nas; he considers himself more like Big L. A freestyle video with the New Yorker and killing the Five Fingers of Death freestyle on “Sway In The Morning” are evidence of how Droog is unmatched among his East Coast contemporaries. Besides his mind-altering freestyles, he has two EPs to back up this claim. Acknowledging himself as “the nicest,” Droog is well aware that his music is not average or ordinary, and he prides himself on that.
With references and allusions that no one else is making, his music allows the listener to infer that this guy is an old soul. This is yet another reason why people could have assumed he was Nas, because of lines that show an extensive knowledge of the past. But his style goes beyond this.
Layered, mysterious, esoteric–his music is something that diverges significantly from the norm. It’s surprising that so many are unaware of him. Recently touring with the newest hip-hop duo PRhyme, which consists of Royce Da 5’9” and DJ Premier, Your Old Droog is certainly attempting to make a name for himself. But this can be a challenge considering he has minimal social media fame due to past privacy about his persona.
His first, self-titled EP was released eight months ago and many issues were brought into it; a new line or play on words is recognized with each repeated listen. He has not hesitated to put out even more music with his other EP, which was released a few weeks ago.
Dropping great music, being distinctly different than the average and taking his own autonomous career path, Droog is not letting popular culture, social media or conspiracy theories hold him back. Your Old Droog is New York’s most promising hip-hop artist, and he hasn’t even dropped a full-length album yet.