“The Testing” is a novel about Cia Vale, a high school student living in a small farming town. She wants to go to university because her father did and she wants to make her parents proud, unlike her three brothers. When she is told that she will be going to the testing with her crush, Tomas, she is overly excited. Cia’s father warns her to trust no one and tells her what he remembers from his experience.
Each student is given a bracelet with a specific symbol. Throughout their testing, the officials use these to keep track of the students and their test scores, but they use it for more than they disclose. Cia finds this out early in the book and watches what she does and says while wearing the bracelet. From here on she does not trust the officials.
The first test is a written exam. This test puts so much stress on the students that some commit suicide. The officials act as though there is nothing wrong with it justifying it as a weeding out the weak. Cia starts to realize there is something wrong with this program.
The second test involves of sorting poisonous and non-poisonous plants. When the students are positive they have it right, they have to eat the non-poisonous plants.
The third test involves working in groups. Everyone is put into a group with the same symbol on their bracelets. Cia’s group gets a list of problems and each person has to figure out a problem and bring the answer to the official. When that person is done the light changes, telling the next person to go. Her group cannot agree on some of the answers and one person has to answer two questions. Cia is afraid because if they answer it wrong they will die, but she cannot tell anyone in her group. Few, not including her friend, come back from the third test.
The fourth and final test assesses the students survival skills. Each student is brought to a closet with weapons, camping equipment and food. They are each told to take three things. Then they wake up a couple miles away from the testing center and are told to make it back.
This book is a good example of a successful dystopian novel and keeps the reader hooked throughout. The characters are lacking some of the things that make us attached to them, but they are realistic. I give it an eight out of 10. 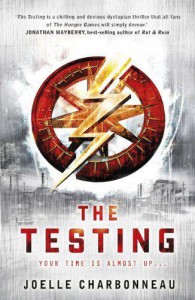