Last weekend, the SUNY Oneonta Men’s Track and Field team defended their SUNYAC title, finishing with a total of 152 points–over 40 points ahead of runner-up SUNY Cortland. This is the second straight indoor SUNYAC title for the Oneonta Red Dragons.

SUNY Oneonta senior Charles Remillard won the 5,000 meter race with a time of 15:05.16.  Remillard told The State Times, “The meet went really well.” While his time was not a personal record, Remillard said the race “got very tactical.”

Roth spoke to the State Times about his final Indoor SUNYACs, saying, “This year’s success, so far, has really been a result of positive minded team leaders across all event groups. Once the team understood how talented and driven each member was, training and competition environments became a culture everyone wanted to be a part of. It just so happened to come together at the right time when we needed each other the most, both on the track and in the stands cheering for one another for a team title.”

Remillard pointed out that, “Winning the SUNYAC meet by 40 points or so is pretty demanding in any sport, especially [considering] in the past two years the meet has been won by single digits.”

Remillard attributed his team’s success to leadership and the ability of individuals to come together towards a common goal.

“I think a big part of this is some of the leadership our upperclassmen took these past couple weeks. I believe it really got us focusing on what we all individually needed to do in order to work as a unit and win as a team,” he said.

“I am really proud to be a part of this team and am very excited to have been able to contribute to the team championship.”

The men’s team will be competing again in the ECAC Division III championships this weekend at the Armory in New York City. 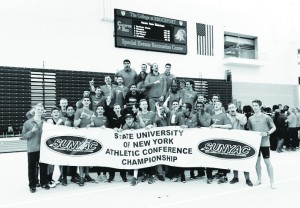