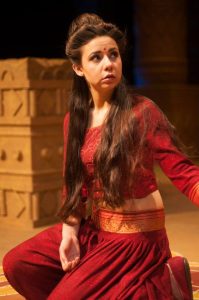 Nagamandala: Play With a Cobra, written by Girish Karnad, was produced by the theatre department and the Mask and Hammer theatre club on campus. The play opened this past Friday, and will continue its run into Thursday. It is the first show of the spring semester’s season and was directed by theatre professor Andrew Kahl.
Nagamandala played with the story-within-a-story trope. It begins with The Man entering a temple late at night on what will be the last night of his life if he does not stay awake. He then hides from gossiping flames, one of which is discussing an argument that took place in the house that it lights. An untold story had manifested itself as a woman and was seen leaving the attic in a beautiful new sari. The woman and her husband were arguing due to his apparent adultery, making the flame late to the temple.
The flame invited The Story to the temple, and The Man convinces her to tell the story in order to keep him awake. In return, he will retell the tale even though he has taken a vow that he will not tell another story if he lives.
The Story then launches into her tale of Rani and Appanna, a newlywed couple who are having marital issues. Appanna leaves Rani locked in the house alone all day, and only returns for lunch. 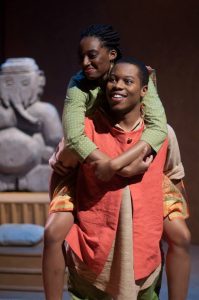 Because of this, Appanna’s well-meaning, blind aunt gives Rani magic roots in order to capture her husband’s attention. However, because of Rani’s fear of the root, she accidentally feeds it to a cobra, who comes to her at night in the form of her husband.
Nagamandala had some very stunning visuals. The set, designed by Barbara Kahl, was very versatile and used for all the scenes in the play. It was designed to look like an abandoned Indian temple. However, aside from being visually stunning, it was also ecofriendly–the students involved with the play and those involved with Mask and Hammer club collected bottle caps of various sizes to add to the set’s tiling detail.
Another creative aspect of the play was the masks, designed and fabricated by senior Micaelina Velardi. The masks, controlled by the flames, were a hilarious addition to the play at a rather serious moment.
However, what made Nagamandala a truly unique addition to the SUNY Oneonta season were the nods to Indian culture. Aside from the oral tradition theme of the play, all of the characters were in Indian inspired clothing. The most noteworthy of these costumes, aside from the beautiful blue sari of The Story, were the flames’ sari-based yellow and blue costumes. Sam Aldridge played a sitar, a stringed instrument used in classical Indian music, off to the side on stage, which added to the play’s ambiance.
Notable performances were made by senior Ashley Antwi as Kurudavva and junior Akeem Celestine as Kappanna. This mother and son duo had excellent comedic timing and always kept the crowd laughing. There was not a sour note throughout this show from any of the cast or crew.
ran February 27 and 28 and March 1 and 3. See the show on March 4 and 5 at 8 p.m. in the Hamblin Theater in the Fine Arts Building. Tickets are free with a student ID and $5 for all others.
The Theatre Department’s upcoming productions are The House of Bernada Alba on March 26-28 at 8 p.m. and March 29 at 2 p.m. and The 26th Annual Putnam County Spelling Bee on April 22-24 at 8 p.m. and April 25 at 2 pm.