A teen from Schenectady, New York reached Internet fame recently for his yearbook photo holding his cat, Mr. Bigglesworth, with a laser-struck background. It was definitely not your typical yearbook photo, so it immediately struck up a buzz online. The Internet fell in love with the picture and even the young man’s high school principal joined in on the fun, taking a similar photograph with her dog.
Draven Rodriguez was the boy behind the “laser cat” photo, and on February 23, Rodriguez took his own life. His father said he had a great sense of humor–which is what sparked the famous photograph in the first place. Even though the school did not publish that particular photograph in the yearbook, it definitely got more positive feedback from the Internet than it would have if it was just printed out on a page. The laser cat picture even attracted the attention of celebrities such as Jimmy Fallon and Ellen Degeneres.
Rodriguez was 17 years old when he took his life. This was a shock to many because he was known as a highly involved and positive student.  Rodriguez was an avid guitar player, gamer and rower. And most importantly, he was involved in the “How to UnMake a Bully” program.  The goals of the program are to build a culture based on high expectations, respect and accountability for performance. Rodriguez also attended youth-leadership conferences and received an award for working with animals at the Capital Region Feline Film and Video Festival back in October.
Rodriguez was a senior at Schnectady High School and the reasoning behind his suicide remains unclear. The photographer, Vincent Giordano, and Rodriguez were hoping the photograph with Mr. Bigglesworth would raise awareness of animal care and rescue. Mr. Bigglesworth was rescued from an animal shelter. Although the photo was not used as Rodriguez’s senior portrait, there will be a page in the yearbook dedicated to the importance of adopting from shelters and rescue organizations.
Family, friends and fans alike are deeply saddened by the young man’s sudden death. On Facebook, total strangers are posting all types of support—words of encouragement, prayers and also stressing the importance of being nice to others. His petition to get the picture of him and Mr. Bigglesworth as his yearbook photo received 7,615 signatures, surpassing Rodriguez’s goal of 500 by miles.
Even when someone is seemingly happy, there may be more going on behind that smile. Draven Rodriguez was one of too many who have taken their own lives. 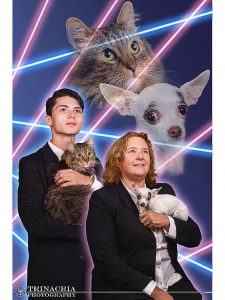