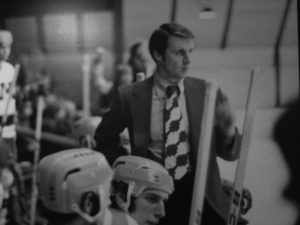 The first time I learned of the 1980 “Miracle on Ice” US Hockey team, I was in the midst of the awkward stages of middle school life. Not many things could have impressed my cynical, angst-ridden mind, but this story grabbed my attention. It is not often that sports can unite a country in the midst of conflict, but a bunch of young men and an incredible coach did just that 35 years ago.

The events leading up to the famous game brought the United States some of the darkest times in its history. In the 1970s, Americans saw oil prices increase astronomically, as well as the capture of 52 hostages in Iran, causing the deaths of eight service men who tried to rescue them, the Watergate scandal and the embarrassing end to the Vietnam War. Of course, let’s not forget the constant fear of total nuclear annihilation at the hands of the Soviet Union. To say the least, things were pretty bleak in the States. Americans needed anything they could cling onto during such times of unrest.

The Winter Olympics of 1980 in the tiny tourist-trap of Lake Placid, New York had the potential to bring that hope. However, hockey was of little concern. The heavy favorites were the dreaded Soviet Union, who rarely, if ever, lost a competition. In fact, they have been known to beat our professional players by double digits. The idea that amateur, college-kids could even make it out of the first round was farfetched. The Soviets had beaten USA 10-1 at Madison Square Garden before the Olympics even started. But, despite all odds, they made it to the medal round to face the juggernaut Soviets in the semi-finals. Tied 2-2 late in the third period, Captain Mike Eruzione scored the game winner. The Miracle was complete and the country reveled in excitement. The Americans would go on to defeat Finland and win the gold medal in the face of seemingly insurmountable odds.

One game had successfully brought together a nation in turmoil. It was poetic in a sense; America was against the ropes. She was not the shining jewel she used to be: she was the underdog. The Soviets, with their military might and prowess, were a real threat. The symbolism of the U.S. taking them down on ice was hard to ignore. And of course, eleven years later, the Soviet Union would itself fall.

Twenty eight years later, a 13-year-old me never knew the impact of the events in Lake Placid. My focus was on finding girls and playing video games. Call of Duty was more important than Herb Brooks or Mike Eruzione. My parents and my seventh grade social studies teacher would set that straight, with a little help from Disney. In 2004, Disney released Miracle, a movie highlighting the life of the team and Herb Brooks, portrayed by Kurt Russell with frightening reality, that would go on to shock the world. Being a hockey family at the time, it seemed right to see this classic. That is when my fascination with the team began. I was enthralled by the pageantry of the event, the history leading up to it and the feel good classic story that concluded it. Herb Brooks became my focus. The team he was given should never have qualified for the Olympics, let alone win it. Yet he brought them together and won that medal. His style, summed up in one line from Miracle, was as methodical as it was bold: “I’m not looking for the best players, Craig, I’m looking for the right ones.”

As luck would have it, this all correlated with a project in which we, as students, would have to give a speech as a figure in history. Enter my social studies teacher, who being a hockey fan himself, enticed me to portray Brooks in his speech before that fateful Soviet game. I did, hopefully doing Herb some justice, and tried to spread the goodness of the story to my classmates, who, being thirteen year olds themselves, could probably care less.

Unfortunately, Brooks was killed in a car accident in 2003. Even still, the impact he and the team had on the country was immense. Impactful enough that a middle schooler from Rhinebeck, New York would become immersed in it almost 30 years later. Americans should remember that day in Lake Placid as a time where America came back. Even for a day or a week, we were down and we came back. And that is something we all can learn from.