Jameis Winston has always been the center of attention whether it is for good or bad. He was the number one quarterback recruit coming out of high school and had already been drafted into Major League Baseball. When he chose to play at Florida State, Winston stated that he was going to play both football and baseball, something that is no small task at the Division I level.

Then came his first season as a starter for the Seminoles. He was a redshirt freshman with a lot of hype, and more than lived up to it. Winston went on to win the Heisman trophy, lead the Florida State Seminoles to a perfect season and helped earn the 2014 National Championship over Notre Dame. That’s the good. Now, the bad.

Winston has had a string of off field incidents that put him under the media microscope. These incidents range from shoplifting crab legs from a supermarket, to getting on top of a table in the middle of a busy campus dining hall and yelling a sexually explicit phrase, to a woman accusing him of rape. But that’s not what many people are talking about.

What people are talking about is how Winston’s draft stock is rising due to an improvement in his character. The NFL Scouting Combine is an event where scouts can finally get an up-close look at prospects for the upcoming NFL Draft in April. Some players choose not to participate in the combine because they have outstanding careers and a possible bad workout could hurt their draft stock, costing them millions of dollars. Players who may have been underrated throughout their career may choose to work out there to improve. Coming into the combine there was no question about Winston’s football skill.

There were still worries about his off field issues. If a college kid is finding his way into that much trouble then what is going to happen when he gets millions of dollars and fame? Winston knew he was under the microscope and stole the show at this year’s NFL Combine. In interviews throughout the week, Winston showed both poise and confidence. But according to NFL executives, he blew them away in the meetings. One general manager went as far to say he is the smartest player he has ever had the opportunity of interviewing at the combine. You don’t have much time in the interviews with these players so any time you have must be utilized. Jameis wowed coaches by breaking down plays in the meetings and showing just how high his football IQ really is.

After the combine, the natural consensus around the league is that Winston will be the first overall pick in this year’s draft to the Tampa Bay Buccaneers. That is a really big deal because of his past off field issues and the fact that the reigning Heisman trophy winner, Marcus Mariota of Oregon, has about as clean of an off the field record as  one can have. This goes to show just how impressed these coaches were with Winston this week at the combine. 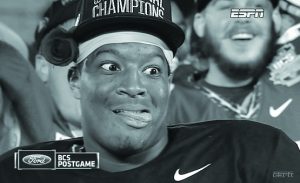