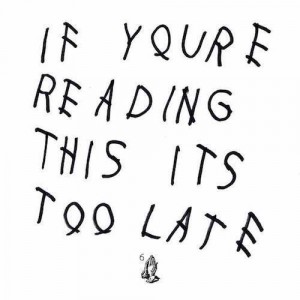 Drake pulled what we’ll now call a “Beyonce” when his seventeen-song mixtape, If You’re Reading This It’s Too Late appeared on iTunes with no advertising or announcement beforehand. The obvious question that arose was about who is being addressed in the title. It seems as though this spontaneous release was a stunt to run down Drake’s four-album contract with Cash Money. In the midst of Lil’ Wayne’s lawsuit with the label, it makes sense that Drake would be looking for a way to get out as well, possibly freeing him before the expected release of “Views From the 6” later on this year.

This is a different type of album than what we’ve heard from Drake in recent years. There are no verses from Nicki Minaj or Rihanna, and no clear-cut club-ready, sing-along-with-your-friends singles jumping out. The focus isn’t on the lyrics for the most part- themes include paying homage to where he came from, staying true and having a great life. The focus isn’t on the music- most songs have fairly straightforward beats and overall more of a rap feel than hip-hop. What stands out are the lyrically driven melodies arising the way Drake delivers his words.

My first impression was that the songs flowed together and contained a lot of the same content. However, with each repeated listen, the songs become more distinct and independent of each other. The album opens with “Legend,” a song that is more commercial than most of the other tracks. Here, Drake is acknowledging how far he’s come and what kind of legacy he would leave if it were to end now. It’s catchy, but in more of an understated way. “Know Yourself” is on the same boat, with possibly the most explosive chorus of the album. He exclaims, “Running through the 6 with my woes,” with “woe” apparently being an acronym for “working on excellence,” a nickname for his crew.

Drake spends most of his album talking about where he came from, either through descriptions or quick mentions. In “You & The 6” he raps, “I used to get teased for being black/ and now I’m here and I’m not black enough/ Cause I’m not acting tough or making stories up bout where I’m actually from.” He’s not exactly talking about spending years playing Jimmy on Degrassi, but he seems to want to get the point out that he’s appreciative of his upbringing.

If the title of his expected album for later this year, “Views From the 6,” means anything, it seems like we’ll be hearing a lot more about this upbringing of his. And, if this surprise release has exempted him from completing his contract in the way it was intended, Drake should have a lot more creative control over what he’ll be putting out in the years to come.

Bottom Line: B. Drake’s lyrical melodies shine but the album seems to lack sustenance in some other areas.

Worth Checking Out: “Know Yourself” might not necessarily represent the entire album, but I wouldn’t be mad if it did.