Whether you like it or not the Kentucky men’s basketball team has a certain system that proves to be successful in today’s college basketball. They get as many top recruits as possible in one year, play them for one season and dominate the Division I scene. Then after the season, they enter the NBA Draft and get taken in the first round. This year is no different.

As a matter of fact, this year might be the best example of that strategy since Head Coach John Calipari has taken over. Calipari is well known for the system that he has instilled in modern men’s basketball. He was famous for it at the

University of Memphis, with the likes of NBA MVP Derrick Rose. This year the Wildcats are currently 27-0 and have been the unanimous number one in the last three AP polls.

This undefeated start for Kentucky is historic even for them, becoming the first in school history to accomplish such a feat. This is not to say they haven’t had tests along the way.

On January 6 they defeated Ole Miss 89-86 in overtime. The following game they went up against Texas A&M and defeated the Aggies by six in another overtime thriller, 70-64. Then on February 10, the Wildcats just squeaked out a win against LSU, 71-69.

Although they have had their fair share of competitive contests, Kentucky also dominated teams to the point of wondering whether the other team was a high school club sent out on the court just to get demolished. They defeated

UT-Arlington 92-44, and also beat Georgetown (KY) College in an exhibition game 121-52. The question to be answered though, is can they keep this streak going and stay perfect all the way to a National Championship? Too many times we see teams go undefeated only to lose in the NCAA Tournament.

Calipari has a balanced roster, making it difficult for one player to get eye-popping stats. But Aaron and Andrew Harrison, along with Willie Cauley-Stein are just three players who are expected to make the jump to the NBA.

There is no question about it, anyone who has ever played sports knows it only gets tougher to keep winning, game in and game out. Whether that be because of the added pressure of staying perfect, or having a target on your back and teams constantly throwing their best at you. Or it could be the more you win and the closer the games get, the more teams learn about you and how to eventually stop you. There is no doubt that you always learn more from a loss than a win.
So, it is tough to find things to fix every time you are victorious. But it goes without saying that this team has the talent and they have the coaching. It will be an absolute luxury to watch this team in the postseason, as it always is anytime you get to witness someone going for history. 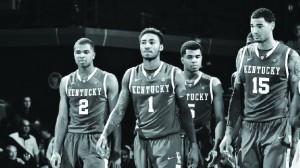