The New York Islanders were consistently one of the biggest jokes in the National Hockey League. Were.

As a franchise they have not won a playoff series since defeating the Pittsburgh Penguins in the 1993 Campbell Division Finals. They were a team that was bought by John Spano, a man who lied about his fortune and was unable to actually keep the team after he instilled so much hope in a fan base that was desperate to fill the outdated Nassau Veteran’s Memorial Coliseum. A franchise which won four consecutive Stanley Cups from 1980-1983, led by iconic names such as Mike Bossy, Bobby Nystrom, Clark Gillies and Billy Smith, while being coached by Al Arbour, one of the best of all-time.

Their former General Manager, Mike Milbury, from the late 90s to the mid-2000s is widely mocked as one of the worst in NHL history. After trading future superstars such as Zdeno Chara, Todd Bertuzzi, Roberto Luongo and Olli Jokinen for an extended list of players past their prime, the Coliseum struggled with keeping attendance up. These issues have gone on as late as 2012 when it was announced that they would be leaving Nassau County to go to Brooklyn at the end of the 2014-2015 season to play at the Barclays Center.

So how is it possible that the Islanders have spent a majority of the 2014-2015 NHL season, currently with a record of 37-19-1, atop the Metropolitan Division and heading towards the playoffs and a legitimate threat to make a run?

While the team was still struggling, the turnaround can be pinpointed to the 2009 NHL Draft. The Islanders, with the first overall pick, drafted John Tavares, a can’t miss forward out of the Ontario Hockey League. At the time of the draft he was already drawing comparisons to Sidney Crosby, the undisputed best player in hockey. But as Tavares (now their captain) was definitely their most important move, the Islanders have been very successful in building through the draft.
Looking at their roster today, the impact of the players they have picked is clear to see. Kyle Okposo, Brock Nelson, Anders Lee and Ryan Strome (all offensive players) have become important members, seeming to contribute on a nightly basis. New York is fourth in the NHL in total offense, averaging 3.02 goals per game, with four different lines capable of putting the puck in the back of the net. Tavares leads the team with 56 points (27 goals, 29 assists), making all of the players around him better. But one of the biggest surprises this season has been Nelson, always regarded as a solid player, breaking out with 15 goals and winning key faceoffs.

It always seemed like just a matter of time before the Islanders offense turned into one of the most effective in the league. The biggest questions were at the other end of the ice. Just last season they were ranked 28th in league in team defense, giving up 3.18 goals per game. It was necessary for General Manager Garth Snow to address issues on both defense and in goal. On May 4, 2014 the Islanders traded a fourth round pick to the Washington Capitals for starting goaltender Jaroslav Halak. Halak has always been a consistent goaltender and finally got his shot to be the number one man. After the trade, Halak signed a four-year deal with Islanders, giving them stability in goal for the first time since Rick DiPietro was an all-star in 2008.

Then, just before this year’s regular season started, Snow made two more moves that turned their defense around. On October 4, he made two trades, one with the Boston Bruins for Johnny Boychuk (for two second round picks) and one with the Chicago Blackhawks for Nick Leddy (for a couple of prospects). These players, both of whom won Stanley Cups in the past, brought legitimacy to their defense.

This year Halak has put up sparking numbers with a 31-12 record and a 2.48 goals against average,was named to this year’s all-star game. Boychuk has also provided an offensive spark, putting up 26 points this season. These moves have improved the Islanders defense to 23rd this year, giving up 2.78 goals per game.

Will this be the year the Islanders finally advance to the second round? It is tough to say. There are plenty of good teams in the Eastern Conference and advancing will be no sure bet. But there has been a clear change in the Islanders organization and the Nassau Coliseum is going to be loud for its final season. 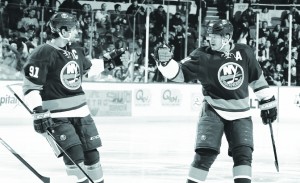