The New York Giants suffered yet another disappointing season in 2014, trudging through a rocky 6-10 campaign, barely enough to stay out of the bottom of the NFC East. This offseason, the Giants will focus on one thing: the offensive line. Quarterback Eli Manning had an impressive year, but was again let down by a struggling line. Manning was sixth in passing yards, seventh in quarterback rating (QBR), yet threw 14 interceptions. Manning has shown his brilliance in the past, leading the Giants to two Super Bowl wins in 2007 and 2011. But of late, his lack of a supporting cast has left “Big Blue” floundering. It is clear when watching Giants games that Manning is not the problem. The problem is an offensive line that cannot seem to keep any defender in front of them.

This leads into the first big signing of the Giants offseason. New York made a statement in the first weeks of the offseason with the signing of 6’2”, 315 pound center Brett Jones. Jones was a rising star in the Canadian Football League (CFL), winning Most Outstanding rookie in 2013. Then in 2014 he won Most Outstanding Offensive Linemen in the CFL. In a sense, he is just what the Giants need. A young leader on the line that will hopefully dictate the best ways to protect Manning and allow him to have the time he needs to get the ball to star receiver Odell Beckham Jr.

Still, even with the signing of Jones, the Giants will most likely go after another lineman in the draft. They have the ninth pick in the first round, which gives them a solid chance to grab La’el Collins out of LSU. Collins is a versatile 6’5”, 321 pound player, who can play both tackle and guard. This gives the Giants the option of beefing up the interior or reinforcing the ends with current tackles Justin Pugh and Will Beatty. At LSU, Collins played left guard, but was moved to left tackle for 2013. Another choice could be Cameron Erving from Florida State. Erving is a 6’6”, 308 pound tackle, guard and center. He has played all across the line for the Seminoles in his college career. His size and dexterity on the offensive front will service the Giants well. Regardless of who, the Giants will look to fortify the line in the 2015 draft.

Their receiving core could be one of the best in the game. Barring a setback in his rehab, the Giants will get Victor Cruz back after suffering a season ending knee injuring against Philadelphia. With him back, Giant fans will finally see Odell Beckham Jr. and Victor Cruz on the field together, which could lead to many explosive plays. Preston Parker and Reuben Randle will battle for the third string spot.

Free agency this season could bolster the Giants’ offense as well. Unrestricted free agents Michael Crabtree from San Francisco and Leonard Hankerson from Washington could be good pickups,  certifying New York’s receivers. Veteran Kenny Britt from St. Louis may also be a good addition to any passing offense. In the running game the Giants could add Mark Ingram from the Saints. His size and power running compliments Rashad Jennings speed very well and could give the Giants a balanced running attack.

New York football has been hard to watch the past few seasons between the Jets and Giants. The Giants, however, are the best geared to make a run at the postseason for the first time in four years. The key is to strengthen the weak offensive line in order give Manning time to throw to already stout receivers that could be made better through free agency. But the Giants must find a way to keep Jason Pierre-Paul and Antrel Rolle or risk suffering a massive loss on defense. 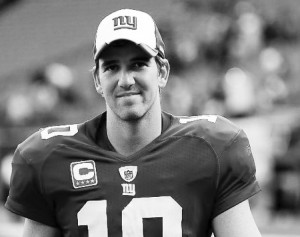