NBA’s All Star Weekend signals a time of rest for all but 24 players in the league. It unofficially signals the halfway point of the NBA season as well, although they have passed the 41-game mark weeks ago. Fans have seen highlight plays, injuries, buzzer beaters and an increased amount of parity this year, but how do the players fare when it comes to the major awards? Lets take a look at who deserves the NBA’s most coveted individual awards:

Sixth Man of the Year:

Williams has often been referred to as an energizer off the bench and has been just that for the Raptors. Coming off the bench, in 24.6 minutes per game, Williams is averaging a career-high 15.2 ppg with a 39.6 field goal percentage. The reason for his scoring outburst this season is him going to free throw line. Williams is going to the line 5.1 times per game, knocking down 4.4, both career highs.

Rookie of the Year:

It’s clear that Wiggins has become the frontrunner for ROTY. After a barrage of injuries to the rookie class, Wiggins has managed to stay healthy and expand his game. After struggling early in the season, Wiggins has found his groove. Since December 26, Wiggins has averaged 18.4 points, 4.8 rebounds, 2.4 assists and 1.2 steals, while shooting 46.3 percent from the field. He’s starting to realize his potential and a superstar is blossoming before our eyes.

Coach of the Year:

Atlanta put the NBA on notice last season when they took the first-seed Indiana Pacers to seven games. No one could have imagined the dominance the Hawks have exhibited this season. Atlanta raced out to grab the early lead as the first seed in the Eastern Conference. The starting five all average double digits in points, and four are all-stars. Atlanta had the first undefeated month in NBA history, going 17-0 in January. Budenholzer gets the nod over Steve Kerr of Golden State because of the roster situation. Kerr went into a great situation in Golden State, inheriting an already championship caliber roster.

Defensive Player of the Year:

Halfway through the season, no player has made more of an impact on the defensive glass than DeAndre Jordan. Leading the league with 13.8 rebounds per game and second in the league in blocks (2.4 bpg), Jordan has become a force to be reckoned with down in the paint.  Although he is ranked 13th in defensive rating, he is top five in defensive win shares. Jordan has been an absolute beast halfway through the season, ultimately locking up this midseason award. Other candidates in play for DPOY include Draymond Green, Tim Duncan, Anthony Davis and Tony Allen.

The MVP race may be the tightest race out of all the major awards, but the nod goes to Curry at the halfway point of the season. Winning has to be taken into account as Golden State currently holds the best record in the Western Conference and Curry has arguably been the best player in the league. Averaging 23.6 points, 7.9 assists and 4.0 rebounds on a 48.3 shooting percentage are the numbers on the surface but we have to take into account his three-point shooting and defense. Curry is in the top-10 in both offensive and defensive win shares. Curry also leads the league in total steals. James Harden has been playing the best basketball of his career as of late, drawing the MVP race even closer. Anthony Davis has to be in the discussion as well. That however, is dependent on a playoff berth. 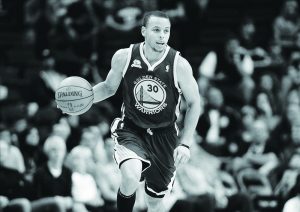