This past weekend the basketball world lost an outstanding coach and an even better person. On Saturday February 7, Dean Smith passed away at the age of 83. He reportedly died of complications from dementia.

It was reported in 2010 that Smith was struggling with memory loss. He was best known for his coaching tenure at the University of North Carolina at Chapel Hill. During Smith’s 36 years at the school, he racked up 879 career victories, which was ranked first all-time at the time of his retirement, and North Carolina won two national championships and went to 11 final fours. He also won an Olympic gold medal as a coach in 1976.

Smith was not just known for his basketball expertise. He was also known for having outstanding young men on his team. While at the helm of North Carolina the graduation rate of the men’s basketball team was 96.6 percent. Smith gave the university’s first ever scholarship to an African American when he gave Charlie Scott an athletic scholarship.

Coach Smith retired in 1997, stating his reason as not being able to coach with the same level of enthusiasm as the years prior. Smith coached many stars in the sport, including Michael Jordan during his playing days at North Carolina. He was known for his four corners offense, which led to the invention of the shot clock because of how much time he could waste on the game clock with this patient style offense.

Smith was inducted into the Collegiate Basketball Hall of Fame in 1987, ten years before he retired from coaching. Duke Coach Mike Krzyzewski who just recently won his 1,000th career game, said this about Coach Smith, “He was one of a kind, and the sport of basketball lost one of its true pillars. Dean possessed one of the greatest basketball minds and was a magnificent teacher and tactician. While building an elite program at North Carolina, he was clearly ahead of his time in dealing with social issues. However, his greatest gift was his unique ability to teach what it takes to become a good man. That was easy for him to do because he was a great man himself. All of his players benefited greatly from his basketball teachings, but even more from his ability to help mold men of integrity, honor and purpose. Those teachings, specifically, will live forever in those he touched.”

Dean Smith had one losing season in his coaching career at North Carolina. That was in 1961, his first year coaching at the university. He went 8-9. His teams won at least 20 games in a season for 27 straight years. Smith was survived by his wife Linnea and their five children. 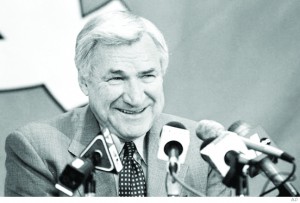