After a disheartening loss against New Paltz, Oneonta’s Women’s basketball team was determined to bounce back. Against the Plattsburgh Cardinals on February 6, Caysea Cohen and Sarah Longto led the team offensively, each scoring 15 points, but it was the  collective effort of the  roster that set the tone defensively.

The Red Dragons held the Cardinals to 15 first-half points on a 22.2 field goal percentage. They keyed in on Brittany Marshall and Devona Paul, Plattsburgh’s leading scorers, and held them to a combined 3-14 shooting and eight points. They would go on to finish with nine steals in the game.

After surrendering an early two points to start the second half, Oneonta jumped out to a 10-0 run sparked by a Cohen three-pointer to make the score 37-17. They would go on to lead the game by as much as 22.
The lead would prove to be insurmountable as the Cardinals were able to trim the lead down to as little as seven, but couldn’t get over the hump. Marshall led the charge but Oneonta was able to hang on.

The next day, the women had total control. They had a wire-to-wire victory, as the Potsdam Bears couldn’t recover after surrendering an early 8-0 run. Cara Adams led the way with a career-high 20 points on 6-11 shooting, knocking down four three-pointers.

Oneonta took advantage of the Bears’ mistakes as they scored 26 points of turnovers. With two wins over the weekend, Oneonta’s women are now 8-5 in SUNYAC play.

Oneonta’s men were able to split their weekend action after suffering a defeat at the hands of the Cardinals, 74-71. Staying resilient throughout the game, the Red Dragons stormed back after trailing by nine points with 11:30 left in the game after a jumper by Jordan Moody.

However, Plattsburgh’s Mike Mitchell led the charge late in the second half with a three-pointer. Oneonta then failed to tie the game after giving up back-to-back free throws to Moody. Lawrence Coleman, Mikey McElroy and Jackson Zuvic led the charge for the Red Dragons, combining for 46 points.

But the men bounced back the next day against Potsdam. After trailing much of the first half, falling behind as much as eight, they charged back largely in part of balanced scoring. Seth Thomsen knocked down two three-pointers coming off the bench to help provide the spark.

After trading buckets for a chunk of the second half, Oneonta took control, eventually extending their lead to as much as 17.

Dignan took over point guard duties when Kelly went to the bench with his fourth foul and began to wreak havoc on the Potsdam floor generals. The defensive intensity rubbed off on his teammates as Oneonta would end up winning decisively.

Coleman, Mager, McElroy and Williams all finished in double-digits, combining for 58 points.

Oneonta will finish off the regular season at home on February 20 and 21 as they take on Fredonia State and Buffalo State. 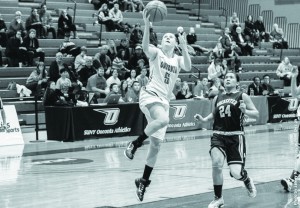