With the conclusion of the Super Bowl on Sunday, February 1, fans attention now turns to what teams will do in the offseason.A team with one of the biggest question marks is the New York Jets. With the loss of Head Coach Rex Ryan and the hiring of former Arizona Cardinals Defensive coordinator Todd Bowles as their new head coach, the Jets made the statement that they will be a tough football team in their new campaign. Todd Bowles took over the Cardinals defense in 2013 and since then cemented them as a defensive powerhouse, winning the majority of their games in low-scoring, defensive slug fests. With his hiring, the Jets look to maximize their only strength–their defensive line.

The Jets, despite their mediocre 4-12 season, are a good fit for the rookie head coach. In Arizona Bowles devised an aggressive, blitzing defensive package, a style that should suit the Jets well. Their defense is primed to be a sack factory with linemen Sheldon Richardson and Muhammad Wilkerson, as well as athletic linebackers Calvin Pace and Quinton Coples, who need little excuse to get the quarterback. That being said, they have few positives to look for in the coming season. The secondary leaves a lot to be desired, with the only experienced corner back being Dee Milliner. Bowles will need to be creative in his schemes to give this young defense any hope of being effective next season.

Bowles is not the only new face in the Jets office this year. New General Manager Mike Maccagnan, who replaced John Idzik, will have  one of the hardest jobs of any GM in the NFL. With over one hundred million dollars of salary cap to give out, Maccagnan has to find a way to not only draft his way to wins, but also strike rich in the free agent market. The upcoming NFL Draft will dictate how the Jets choose to operate in the new campaign.

The key player Jet fans should watch is Alabama wide receiver Amari Cooper. The Jets, who have the sixth pick in the 2015 draft, will struggle to get quarterback phenom Marcus Mariota. Cooper is a machine who caught 124 passes for 1, 727 yards last year for the Crimson Tide, scoring 16 touchdowns. Cooper has size and speed that not only could solidify him as a deep ball threat, but also a red zone target. The Jets will pad their receiving core as well, already having Eric Decker and Percy Harvin. With the addition of Cooper, the Jets will give struggling quarterback Geno Smith a chance at having quality receivers to throw to.

But they could also go in another direction and improve their running game. Wisconsin running back Melvin Gordon could see himself fall to the Jets, depending on which way the Raiders go. Gordon rushed for 2,587 yards last season for the Badgers, finishing second all-time behind  the legendary Barry Sanders. Gordon will slide in as the number one back with veteran Chris Ivory as his supporting cast. Unfortunately for Jets fans, the direction in which Maccagnan decides to go solely depends on how the Oakland Raiders choose to build their team with the fourth pick. The Raiders will be one of the few teams in the top five not going for a quarterback, and could benefit from Cooper or Gordon. Georgia running back Todd Gurley will be a solid third choice for the Jets if neither players are available.

The free agent market will also need to be kind to the Jets if they look to improve this year. Before Jets fans get excited about possibly stealing Dez Bryant or DeMarco Murray from the Dallas Cowboys or Ndamukong Suh from the Detroit Lions, they should realize the Jets don’t need to invest a large chunk of cash on one player. None of those talents will lead the Jets to a winning season alone. Instead, New York will look to build their defensive secondary in free agency. Cornerback Charles Tillman and safeties Rahim Moore and Antrel Rolle could be key signings for the Jets this offseason.

As far as the offensive line is concerned, tackles Eben Britton or Michael Oher could complement D’Brickashaw Ferguson and Nick Mangold well on the line. The blockbuster signing however, could be defensive end Jason Pierre-Paul from the Giants. His size and speed will only bolster an already solid defensive line. The quarterback position still looks to be a question mark and that is a position the Jets desperately need this upcoming season. 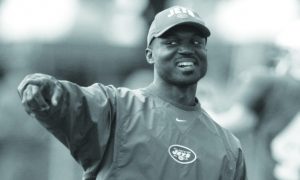