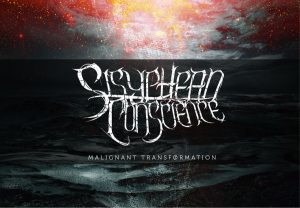 Portland, Oregon’s tech metal quartet Sisyphean Conscience released their anticipated debut album “Malignant Transformation” in late October. The nine-track album is a potent mixture of technical deathcore, modern progressive metal and djent, with no single element overpowering the others. While many bands these days are more focused on labeling their genre instead of simply making good music, Sisyphean Conscience clearly focuses on the latter. “Malignant Transformation” is as strong of a debut album as it’s going to get.
The vocals are top notch; it’s clear that vocalist Taylor Gorman is most comfortable with his powerful midrange, but he’s not afraid to show off some high screams or low growls at times. Sole guitarist Blaine Brun writes enough parts to make Sisyphean Conscience sound like two or three guitarists are present. The dizzying riffs, jagged grooves and meticulously planned chord progressions found throughout the album prove that Brun’s capability as a guitarist and musician are above and beyond many of his peers.
The band’s rhythm section is made up of bassist and drummer Austin Haag and Garrett Haag, respectively. The grooves and beats that the two create lay the heavy foundations to every song on the album. Austin’s bass lines not only hold the groove of the song, they also play off Brun’s guitar work. He also isn’t afraid to show his chops when necessary. The drum beats Garrett provides prove that he’s capable of a number of different types of drumming, ranging from focused metronome-tight grooves to old school death metal blast beats.
One of the strongest aspects of this album is the lack of self-indulgence. In the metal scene today, a number of bands are trying to write the fastest, most chaotic music they can just for the sake of being ‘more technical’ than their contemporaries. Oftentimes, this simply amounts to an inorganic, emotionless pile of riffs that never goes anywhere. The flash is there, but the substance isn’t. Fortunately, this is never the case for Sisyphean Conscience. Everything on “Malignant Transformation” feels appropriate. The music changes enough to keep your attention, but doesn’t expect you to have a degree in music theory to comprehend it. It’s groovy, brutal and downright catchy all at the best possible times.
“Malignant Transformation” proves that Sisyphean Conscience has a bright future as a band and is capable of taking the United States by storm. They’ve already shared the stage with a number of bands (recently opening for the bands Glass Cloud, Upon A Burning Body, and Whitechapel), and perhaps it won’t be long until they’ve got a spot on a full tour.
If one word were needed to describe “Malignant Transformation,” the word would be ‘ambitious’. Sisyphean Conscience holds nothing back on their debut, and has already proven that they are more than capable of holding their own with the titans of the progressive metal scene.
Rating: 9.5/10