Through the New York Rangers’ first 25 games, they had a record of 11-10-4, sitting outside the playoff picture with many issues on the ice to deal with. A team that came within three victories of bringing home Lord Stanley’s Cup looked like they were playing uninspired hockey, making costly mistakes in all three zones. Offensive zone penalties, neutral zone turnovers and leaving too many men open in front of the net on defense led to a stretch of play fans have not seen since before the lockout of 2004-2005.Why were they playing so poorly? Could it have been because of the “Stanley Cup runner-up hangover?”

It is a widely spoken about idea that teams who lose the championship struggle the next year due to the disappointment of the previous season and the extra games they had to play.

Or could their struggles have to do with the injuries they suffered? Before the regular season even started, Derek Stepan, one of their most talented centers, fractured his fibula and missed the first 12 games of the season. In addition, defenseman Ryan McDonagh, who was named the 27th captain in franchise history, missed 11 games after separating his shoulder from a hit by Winnipeg Jets forward Evander Kane on November 1. Free agent signee Dan Boyle also missed time due to a myriad of injuries and health issues.

It was probably a mixture of both that led to such a slow start. Being so close to winning the Stanley Cup only to lose three games in overtime is heartbreaking and takes time to recover from. And with the injuries to two of their most important players, many lesser names tried to fill the voids but failed to get the job done. Head Coach Alain Vigneault tried replacing McDonagh with a mixture of Mike Kostka, Dylan McIlrath and Conor Allen, none of whom managed to stay in the lineup. On offense, Stepan was replaced with Chris Bourque and Chris Mueller. Once again, few contributions were given.

But after those three players returned to the lineup, the Rangers started playing better hockey. Since their 11-10-4 start, their record since has been 18-5, including a stretch in which the Rangers won 13 out of 14 games, a franchise record. There have been many important players during this impressive run, but none more vital than Rick Nash. Nash has put himself in the running for league MVP at the halfway mark of the season as he is near the league lead with 31 goals. 15 of which have come in the third period, proving vital for the “Broadway Blueshirts” during crunch time.

Another key to their success this season has been Stepan. In his first 31 games played, he has accumulated 32 points, helping create a dangerous second line for a team that has struggled to score for years. His nifty passing has led to an increase in Chris Kreider’s play, along with a renaissance year from Marty St. Louis. Throughout the first half of the season, the Rangers have averaged 3.00 Goals per Game, ranking sixth in the league.

Their defense has been just as effective with the return of McDonagh. With with their captain, the play of Dan Girardi, Marc Staal and surprising contributions from Kevin Klein, the Rangers are as deep on defense as any team in the league. Due to Staal’s play, he was given a six-year contract extension that will keep this defensive core together. As of now, the Rangers average giving up 2.32 Goals Against per Game, ranking third in the NHL.

In goal, Henrik Lundqvist has been solid after a slow start in which the defense in front of him was struggling. He has a Goals Against Average of 2.25, along with five shutouts, giving New York a chance to win every night.

While their play has improved as the season progresses, there is still work to be done. They are statistically the second worst team when it comes to face-offs (only behind the pathetic Buffalo Sabres). To sure this up, it may be best for General Manager Glen Sather to make a trade for a legitimate center to fill out the lineup. It will be an interesting race to see who will win the Metropolitan Division title in a race between the Rangers, Pittsburgh Penguins, Washington Capitals and the resurgent, division leading New York Islanders. Let the second half begin. 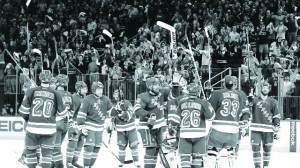