With the retirement of long time commissioner Bud Selig, Major League Baseball looks forward to a new age. Selig was arguably the most tested commissioner in the history of the league, considering his dealings with the now proclaimed “Steroid Era.” Not since the infamous Black Sox Scandal of 1919 has baseball come under more scrutiny from fans. However, new questions and concerns arise in the uncertain future of America’s pastime. It is this current climate that new Commissioner Rob Manfred has inherited.

Concerns of pace of play will most likely dominate executive winter meetings and questions of a “pitch clock” and eliminating the defensive shift will also be proposed. Manfred, the tenth commissioner in MLB history, has already outlined his plans in a letter to fans. He expresses an interest in “tapping into the power of technology to consider additional advancements that will continue to heighten the excitement of the game, improve the pace of play and attract more young people to the game.” He hopes to modernize the sport while still keeping in tune with its historic traditions.

Under Manfred’s regime it is assumed that this new technology will deal with slow-working pitchers. Analysts and fans alike have expressed interest in a pitch clock that will set a time limit on when a pitch is delivered to the plate. The exact time will have to be vet out. Another addition, or rather subtraction, to the game would be the possible removal of defensive shifts. Manfred has not directly said whether or not he will remove the shift from play, but that he would be open to the change, as he believes it gives the defense an unfair advantage. However, the shift gives strategy and intelligence to the game itself. It is part of the manager’s job to see how his defense can prevent the least amount of runs possible. In a sense, it puts a great deal more pressure on the pitcher to be the entirety of the defense, and limits a team’s ability to perform defensively as a whole.

Manfred’s plans also include a connection between all levels of baseball. In his letter to fans, he outlined his idea for what he calls “One Baseball.”

“My top priority is to bring more people into our game–at all levels and from all communities. Specifically, I plan to make the game more accessible to those in underprivileged areas, especially in the urban areas where fields and infrastructure are harder to find,”  he said. This initiative does not only give more kids access to the game of baseball, but also creates a larger, future talent pool for the major leagues. But fans of the purity of the sport have to wonder if this “One Baseball” concept is placing a monopoly on America’s game.

Manfred has yet to say how far this concept will go. Will the signing of teenagers from the Dominican Republic begin to become the norm for American kids? If the MLB puts his hands in all levels, including Little League and high school, what is to stop the big league teams from signing small time teenagers? In the case of Little League, it is possible that young kids could be signing contracts with pro teams, which is common practice with the soccer leagues in Europe. How is that protecting the purity of baseball? Issues like the eligibility of future college athletes having conflicts with NCAA rules are likely to arise, since NCAA regulations stipulate that players could not have been paid to play the sport they are pursuing in college. In other words, a twelve-year-old child could be signed to a pro team and be cut before he graduates high school. This would likely put an end to their career in baseball before it should have begun. Fans hope that the commissioner will soon lay out an exact plan for the “One Baseball” model so these concerns do not turn into realities. It is under no speculation that Selig guided the MLB through very rough seas, but as Manfred takes the helm his main responsibility is to just keep on course. If this is done, then the MLB will continue to blossom as America’s pastime for years to come. 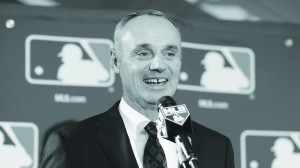