The New England Patriots are no strangers when it comes to miracle catches, especially in Glendale, Arizona.

Seven years ago, wide receiver David Tyree made a play that would go down in NFL history, as he corralled a high-arcing ball, pinning it against his helmet to extend the New York Giants’ game-winning drive, subsequently ending New England’s magical run toward perfection.

It looked as if New England was about to suffer yet another heartbreaking Super Bowl loss at the hands of a miracle catch, this time by Jermaine Kearse. The incredible juggling catch had set up Seattle near the goal-line with a chance to claim the lead and most likely the game.

Butler was the defender who had initially broken up the pass to Kearse only to find that he had hauled in a miracle catch. After giving up a game-changing play, Butler made one of his own as he stepped in front of a Russell Wilson pass toward Ricardo Lockette in the end zone, intercepting the ball and sealing the Patriots’ fourth Super Bowl victory in franchise history.

While most of the credit is given to Super Bowl MVP Tom Brady (328 yards, 4 TDs, 2 INTs), it was undrafted rookie free agent Butler that became the night’s hero.  For a game that spotlighted both defenses’ tough, rugged play, it seemed only fitting that Super Bowl XLIX ended on an interception.

Both teams started out slow, failing to score in the opening quarter, but it was Tom Brady and the Patriots who struck first. Brady hit Brandon LaFell on an 11-yard pass to claim the early lead. Seattle promptly responded with a Marshawn Lynch run of their own to keep up the pace.

On the following Patriots possession, a costly offsides penalty extended New England’s drive, which resulted in a 22-yard touchdown too Rob Gronkowski. However, Seattle did not shy away. With only 30 seconds left in the half, the ‘Hawks quickly moved their way down the field, with some help from a personal foul call on defensive back Kyle Arrington, eventually scoring on an 11-yard TD pass to Chris Matthews.

Matthews, an undrafted free agent out of Kentucky, was signed to the 53-man roster on December 6. Matthews had zero career catches before coming to the Super Bowl. He finished with four catches for 109 yards.

Neither team was giving up any ground, and the start of the second half had a different pace. Seattle shot out of  the gate, scoring 10 points in the third quarter to take a 24-14 lead over New England. No team had overcome a 10-point deficit in the Super Bowl and win–until now.

The run started when running back Shane Vereen drew an unsportsmanlike conduct penalty on Earl Thomas III for a late hit to extend New England’s drive. The Pats would go on to score on a four-yard pass to Danny Amendola. After forcing a three-and-out, New England masterfully drove down the field as Tom Brady went 8-8 on that drive, hitting Julian Edelman for the go-ahead-touchdown with 2:02 left to play.

The rest was history. New England survived a near miracle by Seattle with a miracle play of their own, intercepting Wilson in the end zone. His only interception of the game proved to be the most costly.
Seattle had opted to pass on the second down play instead of a run with arguably the best power-back in the league, Lynch. Coach Pete Carroll saw second down as a “throw-away-down,” planning to run the ball on third instead.

They never received that opportunity.

It had to take an MVP performance from Brady to even keep New England in the game. Brady set a career Super Bowl record with 13 TD passes in six games, passing Joe Montana’s 11 TDs.

Jubilation immediately filled the sidelines after Butler’s pick as New England had just earned their fourth Super Bowl victory. Now, all the talks about deflated footballs can be put on hold for the time being.
After what seems to be the most exciting Super Bowl in NFL history, the Vince Lombardi Trophy will finally make its way back to Foxborough. 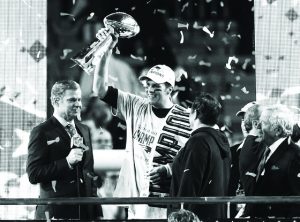