The New York Knicks are currently 10-38 and coming off the worst losing streak in franchise history after dropping 16 straight games, many of them in blowout fashion. After breaking that skid, New York has gone on a 5-2 stretch and finally started playing better basketball. On Sunday afternoon the Knicks defeated the Los Angeles Lakers 92-80, while both teams are still more likely to get a lottery pick as opposed to making the playoffs.

Most fans and analysts would place the blame on Carmelo Anthony missing six games with a sore left knee, a recurring issue all season, for that long losing skid. When Anthony is playing, he averages 24.1 points per game, leading the team. During their losing streak, the Knicks never led at the end of the first quarter, causing people to believe that they are coming out flat. Rookie Head Coach Derek Fisher is sure to be seeing how difficult it is to motivate these players to come out and give their all.

In an earlier interview with the New York Post, Fisher admitted he did not realize that getting his players fired up for every game would be one of his major duties. Was this a rookie mistake by a first year coach? Or did he not believe going into the job that he was going to have to motivate these professionals to play their best?

Fisher was a successful player in the league for many years and won three consecutive championships while playing for the Los Angeles Lakers under current Knicks President Phil Jackson. Maybe he believed that all his players were self-motivated and hungry to win just like himself and the greats he was fortunate enough to play with, such as Kobe Bryant and Shaquille O’Neal.
The Knicks did trade guards J.R. Smith and Iman Shumpert to the Cleveland Cavaliers on January 7 in an attempt to clear cap space for the future. This could be a big problem as Smith was an outstanding shooter who could have helped tremendously in the Knicks’ new triangle offense that was brought over by Jackson. It may be possible that the Knicks are just experiencing growing pains. Being a first-year head coach anywhere, in any sport, at any level is a challenging task.

Mix that with a new offensive scheme and new players who are playing in this system for the first time and wins will be tough to come by.

In addition, combine the ego of Carmelo Anthony, along with the guaranteed pressure of being in New York City, and the result is one of the worst seasons in franchise history. The Knicks’ only hope is to rebuild, whether it be through the draft or by signing affordable, young free agents. Fans just need to be patient, again. 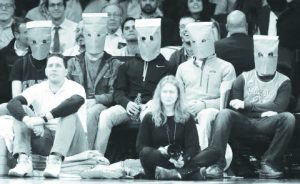