On January 23, Chicago Cubs legend Ernie Banks passed away at the age of 83 from a heart attack. Few have lived the kind of life that Banks’ did–one filled with enthusiasm and pioneering achievement. Passionately referred to as “Mr. Cub,” Banks personified everything that a franchise could want in a player.

Born in Dallas on January 31, 1931, Banks broke into the Negro Leagues with the Kansas City Monarchs in 1950.  However, a year later, Banks was drafted into the US Army to serve in the Korean War. After his duty ended in 1953 he returned stateside and finished playing with the Monarchs. Later that year, he signed with the Chicago Cubs and made his MLB debut on September 17 at age 22. Banks made history when he became the first black Cubs player. His breakout season came in 1955 as he smashed 44 home runs, 117 RBIs and hit .295.

Over the next five seasons, Banks clobbered 248 homers and became the first National League player to win back-to-back MVP awards (1958-1959). During the 1961 season, knee troubles forced him to move from his natural shortstop position to left field, and shortly after that to first base for the rest of his career. In 1967, Banks was named a player-coach for the Cubs, a position he held until retiring in 1971. Over the course of his career, Banks hit 512 home runs, had a .274 batting average, garnered two MVP awards and one Gold Glove, in addition to being an eleven-time all-star. Banks also holds the record for most games played without a postseason appearance (2,528). He played all of his 19 MLB seasons for Chicago.

Following his retirement, “Mr. Cub” joined the Cubs’ coaching staff and pursued many other ventures after his baseball career. In 1967, Banks and friend Bob Nelson became the first black owners of a Ford Motor Co. dealership. In his first year of eligibility, Banks was elected to the Baseball Hall of Fame in 1977 and had his number 14 retired by the Cubs five years later, becoming the first player in Cubs history to receive that honor. Later in his life, Banks established the Live Above & Beyond Foundation, was named a Library of Congress Living Legend, named to the MLB All-Century Team and received the Presidential Medal of Freedom.

Ernie Banks lived a life that many people can only dream of. He played and remained with a single franchise and city throughout his life, amplifying a degree of loyalty that is sparsely found in today’s game. Chicago mayor Rahm Emanuel said it best, “Ernie Banks was more than a baseball player. He was one of Chicago’s greatest ambassadors. He loved this city as much as he loved and lived for the game of baseball.”
Not only has Chicago lost its favorite son, not only has baseball lost one of its all-time greats, but the world has lost a good man. 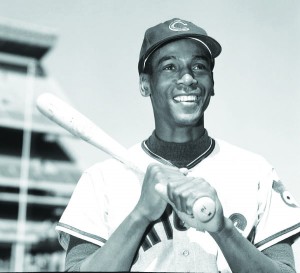