Over winter break I spent a portion of my time abroad in the beautiful country of Italy. I participated in “Winter in Rome,” a study abroad course offered through Stony Brook University. I’ve wanted to travel to Italy for as long as I can remember, and this was the perfect opportunity.
It is amazing how much can be accomplished in 18 days. The itinerary was so packed– which is why I’m happy I chose this program. Within two weeks I saw some of the most influential and important parts of Italy– Rome, Florence, Pisa and Pompei. These are places that take people a long time to get around to, and I managed to check them all off my list in one fantastic trip. The days were long and packed with things to do, on top of the jet lag, climbing duomos and walking miles through cobblestone streets. This trip was quite exhausting. But, of course there was plenty of pasta and gelato to make up for that.
I took a course on Italian-American immigration and learned a lot about my own family history. Even though we had a set schedule for class, the trip itself was a learning experience. The two Stony Brook professors that taught us made the trip even better. Their names were Mario and Luigi. (I could not think of more appropriate names for Italian professors)
Our accommodations included hotels in Rome and Florence for a weekend. Travel was done by one of two ways: the metro or your own two feet. The streets of Rome are even more packed than
New York City. Drivers are reckless, and as much as I wanted to rent a Vespa for that Lizzie McGuire movie-moment, I would have been smothered into the cobblestone streets. The metro was simpler and more efficient to ride than in New York, so that was our main mode of transportation.
We were lucky to experience two of the biggest rivals in European futbol compete against one another: Roma vs. Lazio. This game was unlike anything I have ever seen before– smoke bombs exploding, flares shooting in every direction and insane fans. These fans would never get away with half of the things they do at an American game. You really can tell how passionate these people are for their teams– the angst on their faces when the opposing team scored a goal, or the face of pure happiness when their team scored.  Being absolutely clueless about futbol, I definitely paid more attention to the cultural experience of being at the match than anything else.  No other sporting event will compare unless I get back to another Roma versus Lazio game.
Going abroad is all about getting out of your comfort zone by fully immersing yourself in a new culture. Although a lot of people in Rome spoke English, there were plenty that did not, and that communication barrier was hard to get over. I have seen a lot of Italy, but not nearly enough.  I know I will return to broaden my horizons even further. I have one piece of advice: If you have an opportunity to go abroad– go. 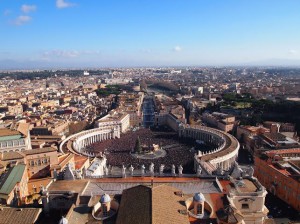