The year is 1989. The setting is Charlottesville, Virginia. The girl is Renee – and she is the only person in the room to perk her head up when the bartender plays the band Big Star.

In his autobiographical book ‘Love is a Mix Tape,’ Rob Sheffield describes this moment as the first time he sees the woman who would later become his wife. To Rob, currently a rock music journalist and editor for Rolling Stone magazine, if a girl knows Big Star she must be the one of his dreams. So he strikes up a conversation, they bond over a shared love of the band’s acoustic ballad “Thirteen” and, before she leaves with her boyfriend, he promises her the same thing he has to every crush before: “I’ll make you a tape!”
Although there have been many mix tapes in Rob’s life, each one has not only soundtracked his life, but changed it, too. Yet, as Rob writes in ‘Love is a Mix Tape,’ this particular one changed it all.

The book is a love letter to these tapes. Written as a series of first-person recollections, Rob uses mix tapes that he’s actually made to chronicle his own life up to that point. From days as “a shy, skinny, Irish Catholic geek from Boston,” to how he came to be in the bar that night in 1989 and the years he spent after with Renee, each chapter begins with a tracklist and date of these mixes, before moving on as a stream of consciousness narrative.

‘Love Is a Mixtape’ is also one of the greatest books ever written about the indescribable bond people have with music; specifically, how that connection can translate into weak-at-the-knees affection, and ultimately total love for another person.

Sheffield writes with such relativism that readers can practically hear the clacking of each tape deck and feel the memories of their own childhood rush back. In its sheer simplicity, ‘Love Is a Mix Tape’ is a wonderfully effective book.

Once Rob meets Renee however, the author’s writing prowess becomes an achingly humane, and truly hilarious, account of falling deeply in love with someone who captivates, intimidates and astounds like no one else. He perfectly captures the essence of Renee through uniquely specific descriptions. He shares her favorite song (“Let’s Spend the Night Together” by The Rolling Stones) and album (Slanted and Enchanted by Pavement), how she could rap Roxanne Shante’s “Go on Girl,” how her birthday was the same day as Bjork, how her voice “was full of the frazzle and crackle of music,” how she was his hero.

‘Love is a Mix Tape’ is not a typical love story; however, it offers some of the most honest observations on the subject. The author writes this book as the widower he has become – Renee died unexpectedly after they were married for less than six years. Sheffield uses these mix tapes not only to reflect on the thirty-something years he’s been alive, but to also revisit those spent with Renee.

He maps out their relationship as a series of shared moments, some remarkably lovely and others tenderly insignificant, but each with the music that the couple was surrounded by at the moment. Rob recalls how they lived through Nirvana’s breakthrough, how the 1994 mix tape “How I Got That Look,” which ranged from Liz Phair, to Superchunk, to Weezer, was created for the lazy summer nights cooking hibachi in the backyard. He couldn’t help but imagine himself and Renee as a synth-pop duo with a name like Metropolitan Floors, or Unpleasant Pleasures or Criminally Vulva. Rob recalls how he and Renee bought a beagle and named him Duane Allman, how they belted David Bowie’s “Five Years” on their fifth wedding anniversary, how Dean Martin’s album Sleep Warm was at the top of the CD pile the day Renee died.

You don’t have to be a music junkie to enjoy and feel touched by this book – these memories and feelings are universal. When Renee dies you feel a loss for not only Rob, but yourself. You feel sad to have missed out on her, and you ache for Rob to have loved Renee fiercely just to lose her.

It’s in these later, mix taped chapters, the aftermath of her death, that ‘Love Is a Mix Tape’ truly sinks its teeth in and refuses to loosen its grip. Sheffield writes with utter humanity and truth that you sometimes feel intrusive. He describes life without Renee as one late night, “straight-to-video women’s-prison flick” at a time, as going to chain restaurants to sit in the back booth undisturbed, as hearing a new song and knowing he’ll never be able to share it with her.

Yet, as with the nature of music itself, and with the benefit of hindsight, Rob is ultimately able to end ‘Love is a Mix Tape’ with optimism and a widower’s wisdom that life continues and moves on. He meets new people, hears new songs and makes new mix tapes, knowing that his old ones will always be there when he needs them.

‘Love is a Mix Tape’ is as much about the romanticism of two different people with the same passion for music being in love as it is about that music itself, special in either its significance or lack thereof. It’s beautifully written and hard-to-forget – like the best songs of your life. Perhaps in the end all we have in life is love, music and the knowledge that they’re sometimes the same thing. 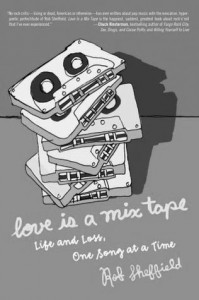