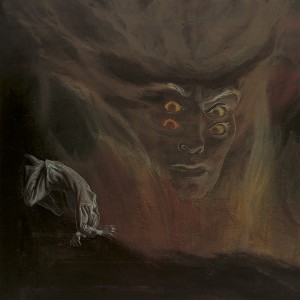 Finland has been widely known in metal circles as a breeding ground for great extreme metal acts over the years. At 53.5 bands per 100,000 people, Finland is actually the country with the most metal bands per capita, with their Scandinavian neighbors Sweden and Norway behind them at 22.7. The United States only weighs in at a measly 5.5. Finland has given us great death metal acts like Convulse, Demigod, Demilich and Amorphis, who went on to become soft rockers. Finland has a noteworthy black metal scene, consisting of seminal acts like Beherit, Impaled Nazarene and Archgoat as well as current torchbearers Horna, Behexen and Sargeist. Though, arguably the most popular extreme metal band to come out of Finland is the grindcore outfit Rotten Sound. But that’s not who this review is about.
This review is about the clandestine and mysterious doom/death metal act Swallowed, from Helsinki, and their debut LP Lunarterial. Swallowed are a four piece group consisting of Mika Salimäki on bass, Jaakko Hietakangas on guitar, Samu Salovaara also on guitar and Ville Kojonen on drums. Vocal duties are split between Salovaara and Kojonen. Not much is known about this band besides some of the other bands the members play in, most notably the speed metal outfit Speedtrap (of which Jaakko Hietakangas just picked up guitar duties this year).
The band formed in 2007 and had a string of two demos and one EP, leading up to Lunarterial, which was released October 14 on Dark Descent Records. The sonic textures and atmospheres evoked on Lunarterial are what define the album. Swallowed live up to their own name as they sound like what being devoured whole by a Lovecraftian entity that has preyed on you through a rip in the timespace might sound like. The music on here is abrasive and otherworldly. The band cites California gore-lords Autopsy as one of their main influences, and it shows through their contrasting use of ripping blast beats and dirge-like doom metal tempos.
The album starts with an ambient, psychedelic intro called “Opening Of The Key” and then drops you into a swirling maelstrom of chaos that is the second track, “Reverence Through Darkness.” Swallowed use riffs and solos more to disorient the listener than give them pleasure. This creates a hypnotic effect similar to acts like Portal, Antediluvian and Impetuous Ritual. The band also uses strange effects achieved through pedal and amplifier manipulation that make the atmosphere even more alien-sounding. The band plows through complex song structures and stark changes from slow to fast and vice-versa with ease, further disorienting the listener. The guitar leads are ethereal yet organic sounding. The track “Black Aura” shows the dichotomy between fast, chaotic leads reminiscent of Morbid Angel guitar wizard Trey Azagthoth, as well as off-kilter, moody chordal melodies that were present on diSEMBOWELMENT’s Transcendence Into The Peripheral, an album this band cites as a big influence. The vocals also lend a great deal to the immersive and bizarre nature of this record. Salovaara primarily employs a mid-pitched rasp reminiscent of a traditional black metal shriek. His voice is dripping with venom and malevolence.
The final track on the album, “Libations,” takes up nearly half of the album’s run-time, clocking in at 26 minutes. It is truly a monolithic composition. The song starts off by slowly plodding along at a dirge-like tempo, bringing to mind funeral doom acts such as diSEMBOWELMENT and Evoken. The band builds tension in the subtlest of ways like a great horror film until psychedelia once again takes over and the band explodes into an acidic guitar solo as the other instruments jam-out in free-form. The interplay between the instruments is truly incredible being able to create order from such chaos. “Libations” erupts into a seismic, cataclysmic event that sounds like Black Sabbath, Cream and Grand Funk Railroad all took bath salts together. Despite the long run-time of the final track, it does not overstay its welcome. Lunarterial is an album that is best digested as a whole rather than song by song.
If you’re looking for a fun riff fest like Judas Priest or a lesson in technical wizardry, look elsewhere. Lunarterial’s production melds all the instruments together into one monolith of cacophony. It’s pretty likely that upon the first couple listens one will walk away not remembering any one riff or solo from the album. What remains is the total atmosphere of darkness that Swallowed wants to immerse you in. If you’re ready for a 54 minute journey into primal chaos, dim the lights and let Lunarterial swallow you.
Rating: 8/10