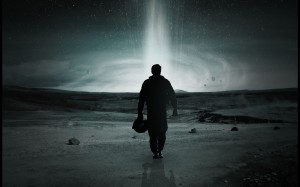 “Interstellar,” written and directed by Christopher Nolan ,of “The Dark Knight “Trilogy, hit theatres November 7. Anyone familiar with Nolan’s work knows that his films are so intricate and complex that they can be watched repeatedly and still hold your interest. Films such as “The Prestige” or “Memento” come to mind, known for their plot twists, and endings in which everything is satisfyingly revealed. “Interstellar” has comparable excitement and thrill. The last thirty minutes are so intense it had me glued to my seat, with several “oh my god” moments from fellow audience members.
“Interstellar” is inspired by the work of theoretical physicist Kip Thorne, who was also the executive producer and scientific consultant of the film. It is set in the future. The earth is dying and the world has turned its focus on growing food and space travel. The main character, Cooper (Matthew McConaughey), is a NASA flight pilot and engineer- turned-farmer who lives with his family, which includes his father-in-law, Donald (John Lithgow), son Tom (Casey Affleck) and his daughter Murph (Jessica Chastain), who believes there is a ghost haunting their house that is trying to communicate with her. Cooper discovers that this “ghost” is actually an unknown form of intelligence sending them coded messages and the family is directed to a secret NASA installation led by Professor Brand (Michael Cane). Suddenly, the main premise of the film begins. The professor and his daughter Amelia Brand (Anne Hathaway) tell him that they have discovered a wormhole near Saturn that leads to another galaxy. They explain that twelve scientists would have to travel through to twelve different “worlds” to see if they might find a new home for all who inhabit earth. Cooper is asked to join this mission and he cautiously accepts.
I will not explain any further, for fear of spoiling the film. “Interstellar” had a budget of $165 million and it was apparent. With Nolan’s philosophy to do as much as possible on set, the money for CGI is used where it needs to be. The visuals of the scientists traveling through the wormhole, as well as what they confront in the galaxies, all look as they might in reality. What has become a mainstay in Nolan’s films, in addition to his visual artistry, is the flawless cast. McConaughey is arguably at his best, inspiring wells of tears for many. In addition, Hathaway gives one of the most arousing performances of her acting career. The film is surprisingly emotionally inspiring for a Nolan film, which enhances “Interstellar” even more than its sci-fi predecessors.
Amongst all of what is done right in this film, there are a couple issues I had with it. First, although the film is engaging, its slowly paced beginning, it feels as if you are anticipating the core action of the film for minutes on end, (the film is almost three hours long). The second being it’s overly scientific-focused elements, which tend to be overwhelming for the common viewer.
All in all, “Interstellar” is a must see for any fan of Nolan’s, or anyone who simply wants to leave the theater excited by a thriller. I highly recommend this film, accompanied by some words of wisdom: Use the restroom before and don’t buy the large drink. I give “Interstellar” a
9.5 out of 10.