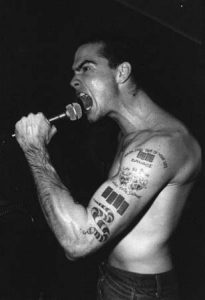 Hardcore music is often defined as a subgenre of punk rock, which is true in some respects, but at its core this aggressive and culturally significant form of music has become so much more than just a “little brother” to punk. The underground hardcore scene began in America in the late 1970’s as bands started to become “fed up” with the monotony of the punk scene, according to hardcore historian Steven Blush.
Crunching rhythms, aggressive lyrics, breakdowns and tempo-shifts permeated the music and instantly reeled in American teens. By the 1980s, major cities including Los Angeles, New York, D.C. and Boston had become hotspots for this new wave of heavy music. It was in Los Angeles that perhaps the most influential hardcore band was formed, Black Flag. Led by eccentric lead singer Henry Rollins, the band focused on themes including poverty, paranoia and neurosis. Their non-conformist ideology also resonated for many young fans in LA. Black Flag’s raw, sporadic sound laid the blueprint for many future hardcore bands and was a musical release for a country that emerged from the unpopular Vietnam War while also living with the new threat of The Soviet Union.
While the Los Angeles scene established the musical aspects of hardcore music, Washington D.C. and Boston were where the culture of hardcore came full circle. In an attempt to counter the punk culture of heavy drinking and recreational drug use, D.C. -based band Minor Threat sparked a new subculture with their song “Straight Edge.” Fans then began identifying themselves as straight edge by refraining from drugs, alcohol and promiscuous sex.  While the straight edge movement may have seemed harmless at first, violence began in Boston to erupt in the underground. Many Boston bands were influenced by D.C.’s straight edge, and consequently formed the Boston Crew. Members of various bands including DYS, Negative FX and SS Decontrol founded this militant straight edge group. The crew created controversy when they began assaulting “punks” who drank or used drugs, which put the hardcore scene in a negative light.
The Boston street gang Friends Stand United furthered this negative reputation. Elgin James founded the gang in 1980 with one goal in mind: rid hardcore shows of drug dealers and racists. James and his gang would brutally beat these individuals in order to send a message that their presence and ideals would not be tolerated, furthering the notion that hardcore music and violence were directly correlated. The gang has since tried to move away from the criminal world but they are still classified by the FBI as a street gang. Militant straight edge groups have significantly tapered off since the 2000s as we are starting to see the straight edge community move toward a more cohesive and peaceful outfit. Despite all the controversy and adversity, hardcore is still kicking today this become very evident for us here at Oneonta with the first Oneonta Punk Festival in October. And although scenes have popped up in Europe and Asia, hardcore music will always remain a truly American art form.