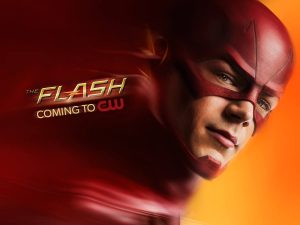 This fall season there are a number of comic book-based television series premiering. These include: Gotham on Fox, Agent Carter (a prequel/spin-off of Marvel’s Agents of Shield), Constantine on NBC, iZombie on CW, as well as Flash, which is a spin-off series of the hit series Arrow. Flash may be the most interesting of these new shows, because comes from the producers of Arrow, which is must see TV for superhero fans.
Barry Allen, who is played by actor Grant Gustin, gets hit by lightning and becomes the fastest man alive. Barry first appeared in season two of Arrow during a two-part arch, in which we see Barry get struck by lightning at the end. The original plan was for a back-door pilot, later in season 2 of Arrow. CW executives liked the responses to the episode and ordered a full pilot. The show picks up with Barry returning to Central City after the events of Arrow, but fills in some things before we see the Star Labs particle accelerator exploded causing the lightning bolt to hit him, for those who hadn’t seen the episodes of Arrow. It jumps Nine months later Barry wakes up and his powers soon start to appear.
Barry wakes up in Star Labs after the hospital thought he was constantly crashing, when his heart was beating so fast it could not be detected. It is where we meet some of the supporting cast, Danielle Panabaker plays Caitlin Snow, is a closed of due to losing her fiancée in an accident. Carlos Valdes who plays Cisco Ramon, a very out going, hyper guy, who I believe builds things, and actually makes Barry’s suit. They are part of the team that built the accelerator with Dr. Harrison Wells (Tom Cavanagh), the lead on the project. Barry leaves to check on his long time friend and love interest Iris West (Candice Patton) and starts to see people slowing down. While Barry is trying to figure out what is going on, with the help of Dr. Wells, Carlso, and Caitlin, we follow Rick Cosnett who plays a detective Eddie Thawne who is in a relationship with Iris and her father’s partner Detective Joe West (Jesse L. Martin). They are looking into a string of bank robberies where a kid comes in and fills the bank with fog. They learn it is someone they thought was killed in a plane crash the night of the Star Labs explosion. Instead it granted him the power to control weather.
Grant Gustin who many people expressed concerns about Gustin when he was cast in the role, but he has proven, between the two Arrow episodes and the pilot, that he was the right choice for the part.While the rest of the cast fit their spots well, it took three episodes for Gustin to mature and make their character his own. I am faith that the rest of the cast will do the same over the season.
The tone of this show is very different then that of Arrow, and it will be interesting to see cross-over episodes, two of which are already planned in the first part of the season. As mentioned, Arrow is darker and serious tone, while Flash is going for a lighter, and comic in some ways. Having Barry run and crash into the back of a pillow truck is a perfect example. While my concern is there, I do have faith in the producers to pull it off.  Barry is the only person who interacts with all of them, and does a very good job. The question is how will these characters do when they finally interact in future episodes.
A nice touch to the pilot was having Stephen Amell, who plays Oliver/Arrow come in for a cameo to give Barry some advice and tell him he could be what he could not be, a hero. In the conversation Oliver gives Barry his name when saying he could save people in a flash. The cameo of Oliver help show that the darker tone of Arrow and the lighthearted side of The Flash still can work together as they share a universe. This will be come more important as the cross over episode they have planned later the season. While the episode was great and it is a pilot it has some of the problems most pilots have. CGI of the super speed is not constant, and some of the camera shots of Barry up closed just didn’t work for me.
The biggest problem with this is having to craft an episode that sets up a whole series. In this case, having the radiation from the explosion converging in areas of the city creating Meta-Humans (people with powers). I think this could have held off for the second episode, since we could get the idea from plane crash and the underwhelming villain covered that enough. Other then setting up the world of he Flash, their was no real big arch for the series set up, other then the new Meta-Human who will be the villain of the week. Normally this would be an issue, but in Arrow, we learnt Barry is trying to find out who really killed his mother when he was ten.
The person was moving super fast setting up for The Flash’s villain from the comic Reverse Flash as the season villain, but to me that’s a horrible name and hopefully they will come up with something better or find a way to make it work. Overall, the pilot was good and has me excited for the season, and based on the turn out from the premier many people are interested as well. The premier of The Flash garnered the CW it’s highest rating for a premier ever of a 4.79 and held on to most of that audience for the second episode. I give the Flash an 8 out of 10.