The San Antonio Spurs redeemed themselves after their loss to the Miami Heat in the 2013 NBA Finals; they became champions once again. With the 2014-2015 NBA season underway, the obvious storyline will be surrounding the defending champions. Will San Antonio be able to repeat as champions? Or will Father Time defeat the Spurs and crown a new king? It’ll be interesting to watch as everyone from their championship roster will be returning  along with other key additions.

Most fans would think that San Antonio’s title defense would be the major storyline, but that honor actually belongs to LeBron James. Dubbed “The Decision 2.0,” James shocked the world and returned to the Cleveland Cavaliers, bringing along with him what seems to be an army of supporting talent. Interestingly enough, Cleveland had the number one overall pick in the 2014 NBA Draft, which was subsequently used to draft shooting guard Andrew Wiggins. A Kyrie Irving-Wiggins-James combo seemed destined for breathtaking moments throughout the season. But in a blockbuster deal, Wiggins was dealt to Minnesota along with Anthony Bennett, for superstar  power forward Kevin Love. Now part of a new “Big Three,” can James and company bring a title to Cleveland?

It seems as if the NBA can’t avoid the injury plague no matter how hard they try. Two notable players are sidelined with injuries, one expected to miss the entire 2014 season. Paul George suffered a compound leg fracture during an exhibition game, crushing Indiana’s  title hopes at the same time. Once seen as contenders in the Eastern Conference, Indiana will suffer the most drastic fall in the league. In addition, reigning MVP, Kevin Durant, suffered a Jones fracture and is expected to be out at least six weeks. The attention of the Oklahoma City fanbase is now shifting towards Russell Westbrook.

We have “The Decision 2.0” and we have “The Return 2.0” as well. Derrick Rose is making his long awaited NBA return after suffering two significant knee injuries. Can Rose stay healthy and lead Chicago to the NBA Finals? Or will we see another promising career derailed by injuries? Chicago has made important moves in the offseason, adding Pau Gasol and Doug McDermott.

Another interesting story will be this year’s rookie class. Already drawing comparisons to the legendary 1996 NBA Draft class, the bar is set high for these youngsters. Overwhelming favorites for Rookie of the Year Andrew Wiggins and Jabari Parker will lead the charge with all eyes on them. Other rookies to look out for are Aaron Gordon, Dante Exum, Marcus Smart, Julius Randle, Elfrid Payton, McDermott and Zach LaVine.

While the focus of the season is on San Antonio and Cleveland, the rest of the NBA has made their fair share of changes. The Dallas Mavericks look to be one of the biggest risers with the addition of Chandler Parsons and Tyson Chandler, while Houston is facing a season of uncertainty because of the loss of Parsons. The Miami Heat will suffer a drop in victories as well. After appearing in the NBA Finals for the past four seasons, a return to the Finals for a fifth-straight year seems unlikely. It’ll be interesting to see how far Dwayne Wade and Chris Bosh can lead this Miami team.

Going coast-to-coast, Los Angeles is looking to make a serious run for the NBA title and no, I’m not talking about the Lakers. The Los Angeles Clippers have all the makings of a championship team and are ready to make noise. Meanwhile, Kobe Bryant’s time is dwindling as the Lakers are in no position to compete for a title this year.

Initially, the playoff picture is very clear, especially in the Western Conference. The West will return at least seven out of eight teams to the playoffs from last year. The last spot will be up for grabs between Memphis, Phoenix and Houston. In the East, the major power shift involves Cleveland shooting right to the top, with the rest of the top four followed by Chicago, Washington and Toronto. Who does that leave standing? There are only five teams at this moment that should be considered serious contenders for the championship:  the Cleveland Cavaliers, Chicago Bulls, San Antonio Spurs, Los Angeles Clippers, and Oklahoma City Thunder.  It should be a fun season of basketball to watch. 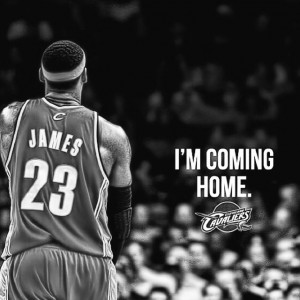