Entering this season, the New York Jets had high hopes to rebound after missing the playoffs for three straight years. This was supposed to be Rex Ryan’s resurgence and he was going to find a way to will his team to victory, giving the dwindling fan base (the Jets have the sixth highest ticket prices and highest Personal Seat licenses in the league) something to cheer about. Seven months ago, Jets Owner Woody Johnson claimed that he was “not going to use the word ‘patient’ anymore. Our job is to perform for our audience.” The owner was saying all the right things, the coach was saying all the right things and the Jets had one of the largest available cap spaces in the league; things were looking up.However as the offseason progressed, the fans and media alike quickly realized that the team was not going to compete for a playoff spot.

The Jets had glaring needs at wide receiver and defensive back, but failed to address these obvious holes. This is due to the fact that they had a newly appointed general manager, formerly of the Seattle Seahawks organization, who saw firsthand how fiscal responsibility and building through the draft was the formula to success. John Idzik wasn’t satisfied with spending his cap space only to have an early playoff exit. He came to the realization that there was no sense in going all in on a team that was not going to be a serious contender and ruining the organizations cap flexibility for seasons to come.

So there is the root of the Jets’ problem. On one end you have a head coach who is desperate for wins in order to save his job, and on the other hand you have a general manager in place who is attempting a rebuilding process and can afford to win later. This entire season has been Ryan with far too few tools in the shed, and as a result the firing of the head coach is now imminent. This disaster of a season falls squarely on the much maligned owner, Woody Johnson.
Over the previous two offseason’s, Johnson has forced Ryan on the incumbent general manager and has set the entire franchise back at least a few seasons. The long overdue rebuild should have taken place after their 6-10 finish in 2012, but Johnson instead succumbed to the pressure of his impatient and sometimes irrational fan base. Jets fans have no interest in a rebuild. This is after all New York, where fans are spoiled by the wild spending and success of the Yankees over the past two decades.

The fans, and Woody Johnson for that matter, need to realize that rebuilds, although painful, are necessary in today’s NFL. A few seasons of suffering can go a long way, possibly leading to the Super Bowl, which the New York Jets haven’t done in 45 years The franchise is currently the laughingstock of the league and no, Percy Harvin is not going to come in and save the day; so relax, Jets fans. 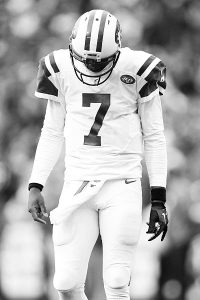