How do you judge someone whose name is connected more with failure in the clutch than the fact that he has better career statistics than Hall-of-Famer Troy Aikman? Throughout his career, Tony Romo has been one of the most criticized athletes in professional sports. He plays the most important position in football and is the face of the highest valued franchise in the NFL; so it’s safe to say his failures are well documented. Between his mishandling of snaps in the playoffs and his seemingly innate ability to throw interceptions in the biggest moments, Romo has gained the league-wide reputation for being a choke artist. However, Romo may be just the opposite.

For starters, in the history of the NFL, no quarterback has a higher passer rating in the fourth quarter than Romo (102.9). This is better than John Elway, Joe Montana, Peyton and Eli Manning, Tom Brady, Aaron Rodgers and Drew Brees, all of whom are known for their clutch play. Understandably, many will argue that this stat isn’t all too telling considering you don’t know what the scores were in these fourth quarters. But over the past three seasons, Romo has led 11 game-winning fourth quarter or overtime drives, which is the most in the league over that span. Since 2011, he’s thrown eight interceptions in the fourth quarter of games within one touchdown. However, during the same span and under the same criteria, Brady has 10 interceptions. Other so-called “clutch” quarterbacks have also fared worse than Romo, including Philip Rivers and his 13 interceptions and Eli Manning with 11. It is safe to say that Tony Romo is better than he is perceived to be in high pressure situations.

Let us also not forget that over the past four years, the Cowboys defense has been historically horrendous. In the 2012-2013 season, the Cowboys allowed the third most yards in league history and set franchise records for surrendering the most first downs and passing yards. With their inability to run the football and a below average offensive line, Romo was forced to try to be the hero down the stretch of games far too often.  For the most part he has done his job, aside from a few ill-advised interceptions, as he holds the highest completion percentage among active quarterbacks in the fourth quarter of games within seven points.

But this season, the Cowboys are off to a fast start. With a revamped offensive line and a healthy Demarco Murray at running back, they have been able to run all over their opponents. Murray is currently averaging 5.4 yards per carry, which is the highest in the league (minimum of 50 carries) and has been able to take a lot of pressure off  Romo. As the season progresses and the games get tighter and more important, keep an eye on how Romo performs. Before you write him off as not being clutch, you should see how he performs with a better running game and an improving defense. 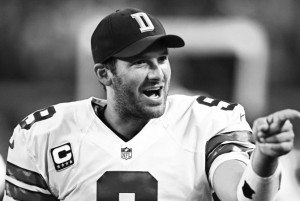