The top quarterbacks of the 2014 draft class have seen action sooner than fans expected. Excitement is an understatement for these fan bases because it’s a position that these teams have lacked for years and they drafted these quarterbacks for a reason. Matt Cassel, quarterback for the Minnesota Vikings, suffered bone fractures in his foot and was ruled out indefinitely. Enter Teddy Bridgewater, the 32nd overall pick out of Louisville who threw for 150 yards with no scores or turnovers in a Week 3 matchup against the Saints. Cassel’s injury should make way for Bridgewater to take the offense to the next level. The Vikings took on the Atlanta Falcons at home in Week 4 and Bridgewater got his first career start, passing for over 300 yards and a running touchdown.

Johnny Manziel saw action during the Browns Week 3 game against the Baltimore Ravens, catching a 37-yard pass that would eventually be negated due to a holding penalty. Manziel is currently learning the Browns offense and will most likely not see any snaps unless Brian Hoyer suffers an injury. Hoyer threw for 290 yards and one touchdown against the Ravens. However, the Browns came up short, losing by a field goal. Don’t rule out the Browns or Hoyer for that matter just yet. The Browns are 1-2 and were on a bye week during Week 4.

Jacksonville Jaguars quarterback Chad Henne played an abysmal game, throwing for just 33 yards against the Indianapolis Colts in Week 3. He was benched at halftime, which was the right move by Head Coach Gus Bradley. Bortles, the third overall pick out of Central Florida, will be seeing action for the rest of the season which should leave Jaguars fans with nothing but excitement. Bortles started the second half against Indianapolis and threw for 223 yards with two touchdowns and two interceptions. The rookie will experience growing pains in his transition from college to professional football and will be a factor for the Jaguar’s offense moving forward. The Jacksonville Jaguars are 0-4 after losing 33-14 to Phillip Rivers and the San Diego Chargers during their Week 4 matchup. In the offseason, Jaguars General Manager Dave Caldwell planned to sit Bortles for the 2014-2015 season so he could learn the offense.  But Bortles should have started against the Colts because of Henne’s unsatisfactory performance through the first two weeks of the season.

This preseason, Bortles threw for 521 yards with two touchdowns and zero interceptions. At 6’5”, Bortles can see the field and utilize his receivers to their utmost potential. The Jaguars’ run game has been irrelevant in recent weeks, but Bortles provides stability in the passing game that will eventually open up running lanes for running back Toby Gerhart. Bortles is versatile, which makes him a threat to defenses by both running and passing. 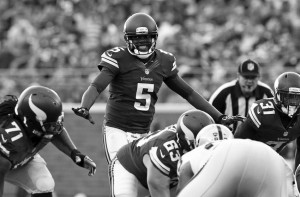 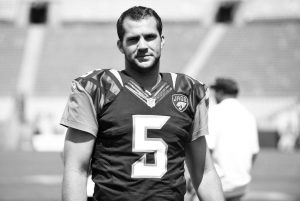