For this article the obvious teams on both sides of the spectrum will be omitted, including the Broncos, Seahawks, Jaguars, Raiders etc. This will focus on the teams in the middle of the, pack experiencing resurgent years or continued success. Here are the true contenders and the pretenders of the 2014 season:

Cincinnati Bengals: The Bengals have looked like one of the best teams in the NFL through the first few weeks of the season. Despite losing their offensive and defensive coordinators in the offseason, they have not missed a beat. Their defense has one of the most talented rosters and has played like it so far. While having a defense that has given up the fewest points in the NFL, their offense  has been just as good, ranking in the top 15 in every major offensive category. Despite mediocre play from quarterback Andy Dalton, this team has been firing on all cylinders and are the favorites to win the AFC North.

San Diego Chargers: One year after barely making the playoffs, the Chargers look like a stronger team primed for another postseason trip. Philip Rivers is playing some of his best football, throwing for six touchdowns and one interception through three weeks, while tight end Antonio Gates has seemingly found the fountain of youth. The loss of running back Danny Woodhead will hurt the offense, but the Chargers have enough firepower and defense to make up for it.

Philadelphia Eagles: Last year, the new-look Eagles led by rookie Head Coach Chip Kelly took the NFC by storm, showcasing their fast-paced offense. Quarterback Nick Foles came out of the woodwork to lead them to a 10-6 record and a playoff appearance. This season, the Eagles continue to look like a team that can compete with the elite teams of the league. All three of their victories have been come-from-behind wins, showing they have the offense to overcome a deficit. While the defense can be their Achilles’ heel, they play in a soft NFC East and boast one of the NFL’s best offenses.

New York Giants:  Despite winning two games in a row, the Giants are not as good of a football team as they seem. Big Blue’s offense has gotten on track but it is hard to trust Eli Manning over the course of a full season. Other than undrafted tight end Larry Donnell, the rest of the receivers have not played well. On defense, the Giants have given up the fourth most points in the league and while their pass rush seems to have awoken, their secondary is a weak spot at this point. The Giants will miss out on the playoffs this season.

San Francisco 49ers: The 49ers do not look like the same team from the past couple of years. Their offense has struggled, other than when they played a depleted Cowboys defense. They blew a huge lead against the Chicago Bears, and then lost to a Drew Stanton-led Cardinals team. Add on the growing tension between the players and Head Coach Jim Harbaugh and you have a recipe for a downward season. The Niners will be fighting for a Wild Card spot having to jump Seattle and Arizona to win the NFC West, which is a tall order. Given the level of competition in the NFC, it is not out of the question to see this team narrowly missing the playoffs. 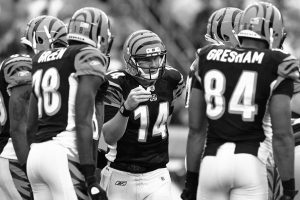