Last year, Florida State quarterback Jameis Winston had an outstanding freshman campaign, which culminated with the Heisman Trophy and a National Championship victory. Some draft experts even projected him to be the top pick in the 2014 NFL Draft if he were eligible.

So what has happened since then? Constant off-field issues including a sexual assault accusation, shoplifting crab legs from a supermarket and most recently, Winston standing on a table in the student union, yelling a sexually explicit phrase. Winston was initially suspended for the first half against 24th ranked Clemson for his actions, but the suspension was increased to the entire game after Florida State’s investigations concluded. Florida State went on to defeat Clemson 23-17 in overtime.

This latest incident has done serious damage to Winston’s immediate future. ESPN analyst Mel Kiper Jr. has dropped Winston all the way to number 25 on his big board, where he was previously ranked as high as third. His constant troubles have finally caught up to him. A report by Sports Illustrated quoted an NFL scout who said, “I’m not sure he’s at a toxic level, but he’s starting to get there.” Will an NFL team take a chance on Winston in the first round?

Winston is drawing comparisons to another polarizing quarterback who was also surrounded by controversy. Johnny Manziel, former quarterback for Texas A&M, had his fair share of issues. From the NCAA investigation on his autograph sales to his partying, Manziel caused some distractions for the team. The big difference is Manziel used those setbacks as an opportunity to not only become a better person but develop into a better football player as well.

There is no question Winston has the skill to be a successful NFL quarterback. The causes of concern are his off field issues and his maturity level. Being thrust into the national spotlight, Winston has made mistakes left and right. He needs to prove to himself and NFL scouts that he is mature enough to handle the pressure of being an NFL quarterback, otherwise he might ultimately end up being compared to notable quarterback busts that lacked self-discipline. Winston still has a long way to go before he returns to number one pick material.

What’s left for Winston to do? He needs to avoid all off-field distractions for the rest of the season. Combine that with spectacular play and Winston’s draft stock may rise and vault him back into the top ten. Unfortunately, his track record shows that another off field incident doesn’t seem too far-fetched. If that does become the case for Winston, his best option may be to return to Florida State for another season to develop maturity and judgment. Otherwise, he can expect to be taken on the second day of the 2015 NFL Draft. 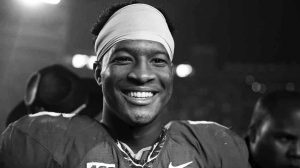