Actress Emma Watson, best known for her portrayal of Hermione Granger in the Harry Potter films, is branching into new territory. On Saturday, September 20 Watson delivered an inspiring and empowering speech on feminism and gender equality at the United Nations Headquarters in New York City. This speech earned her a standing ovation after she discussed the misconceptions of what it means to be a feminist and called upon men to advocate for gender equality.
The British actress is only 24 years old, yet has already been in 18 films, graduated from Brown University with a degree in English Literature and is now a United Nations Global Women Goodwill Ambassador. She’s created a campaign called HeForShe, which encourages men worldwide to embrace the role they have in helping to end gender inequality and frees them from the stereotypes that are forced upon them by society.
“The more I spoke about feminism, the more I realized that fighting for women’s rights has too often become synonymous with man hating. If there is one thing I know for certain is that this has to stop. For the record, feminism is by definition, ‘The belief that men and women should have equal rights and opportunities. It is the theory of the political, economic and social equality of the sexes,’” said Watson at the beginning of her speech.
She went on to state the many instances growing up where she noticed issues of inequality in her personal life. She first noticed these occurrences at age eight, when she was called “bossy” for wanting to direct the plays that she and her siblings would put on for their parents, yet her brothers weren’t. She spoke of how the media and press began sexualizing her at the young age of 14, and at 15, her friends stopped playing sports because they were afraid of coming off as masculine. She also mentions how many of her male friends weren’t always able to express their feelings as they got older. This is important because she takes the time to note that gender inequality is an issue that affects men just as much as it affects women.
She said, “I’ve seen men made fragile and insecure by a distorted sense of what constitutes male success. Men don’t have the benefits of equality either. We often don’t talk about men being imprisoned by gender stereotypes but I can see that they are and that when they are free, things will change for women as a natural consequence … Both men and women should feel free to be sensitive. Both men and women should feel free to be strong. It is time that we all perceive gender on a spectrum, not as two opposing sets of ideals. I want men to take up this mantle. So their daughters, sisters and mothers can be free from prejudice, but also so that their sons have permission to be vulnerable and human too, reclaim those parts of themselves they abandoned, and in doing so, be a more true and complete version of themselves.”
Watson also takes the time to acknowledge that while she grew up in Britain, a country where her parents didn’t love her any less because she was born a daughter and her teachers didn’t think her education was any less important because she was female, that there are many countries around the world where women do not receive the same rights as their male counterparts. Watson believes these rights are essential, no matter what your gender. Rights that everyone should have, simply because you are
human. 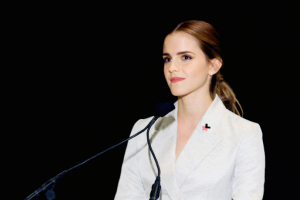