Tournament MVP Kyrie Irving’s 26-point (6-6 3pt FG) performance led team USA to a 129-92 victory in the 2014 FIBA championship game over Serbia. All doubts were finally put to rest once the clock hit 0:00.
Serbia opened the game shooting 5-5 from the field, taking a 10-5 lead, which had the U.S. on the edge of their seats. A measly five-point lead induced curiosity in fans’ minds and posed the question, “Is this the game team USA is going to lose?”

After trading baskets, the USA responded with a 17-3 run to take the lead. The score quickly became 22-15 and the Americans never looked back. Unable to stop team USA, the Serbs simply had no answer for Team USA’s precise shooting and athleticism. James Harden, Klay Thompson and Stephen Curry all shot well from behind the arc, each making at least two three-pointers. The game was out of reach by halftime with the United States leading 67-41.
The second half was the same story. Serbia was unable to get defensive stops and shot poorly from three-point range, handing USA the game. The Americans got what they wanted; a gold medal at the Basketball World Cup. Their victory clinched an automatic berth to the 2016 Olympics in Rio de Janeiro, Brazil.

The Americans were seen as runaway pre-tournament favorites with superstars Kevin Durant, Blake Griffin and Kevin Love on the roster. But all three decided to pull their names out of the tournament due to various reasons. With the youngest roster since 1992, many questioned whether they would be able to win the tournament, especially against the other pre-tournament favorite, Spain, who ended up losing to France 90-85 in the quarterfinals.
With the USA winning their fourth straight international tournament, the age-old questions will rise again, should the NBA be sending  their superstars to play international competitions if they are just going to rule the field? Is it even worth it?

Team USA has dominated opponents the past four years during international competition (FIBA and Olympics). Only four games were decided by ten points or less.
There is no perfect  answer when it comes to allowing NBA superstars to play in international competition. In light of Indiana Pacers guard, Paul George’s serious leg injury as well as USA’s dominance, there will be noise on whether NBA stars should be allowed to compete. Injury liability, the NBA losing out on profits, nothing else left to prove, playing for national pride; you’ve heard it all, but there is no outstanding factor that will sway the decision.
Although there are a variety of suggestions such as only allowing college/non-professional athletes to compete or having certain provisions in NBA contracts that would allow or disallow NBA players from competing internationally. The right decision would be to continue letting the players decide.

They understand the risk of injury when it comes to competing, whether it be during NBA competition or internationally. You can get hurt at any time. The players also understand the reward that comes with winning a gold medal for your country.

There is a tremendous amount of pressure on NBA superstars to decide to compete internationally and that pressure needs to disappear for all these questions to disappear as well. NBA players have the right to withdraw from Team USA at any point. Continuing to empower the players with the ability to commit or withdraw from international competition is the correct process. It is a method that has worked since the 1992 Dream Team and it will most likely continue to work barring any changes made by the NBA. 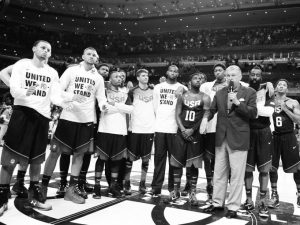