The New York Yankees are all but mathematically eliminated from 2014 playoff contention. They fell short of making the playoffs last year as well, making it the first time since 1994 that the Yankees have missed the playoffs in consecutive seasons.

The 2014 season started out as promising as any for the Yankees. They had done a seemingly terrific job acquiring all-star free agents Jacoby Ellsbury, Brian McCann, Carlos Beltran and Japanese phenom, Masahiro Tanaka. Together, these four players would cost the Yankees over $75 million in 2014 to go along with a payroll totaling over $200 million, which is second highest among major league teams. But since the Yankees are one of the most profitable franchises in all of professional sports, paying for their stars is no burden on the franchise.

Let’s get into the problems the Yankees have hit in this grueling and seemingly endless 162-game baseball season.  First and foremost, the Yankees failed to re-sign superstar second baseman, Robinson Cano. Cano had consistently put up all-star numbers for the Yankees throughout his career and continued to do that for the Seattle Mariners in 2014. General Manager Brian Cashman understood the loss at the time but told the public that his free agent signings would make up for Cano’s absence. The problem is, they did not.  Beltran has been in and out of the starting lineup all season. Tanaka has missed more than two months with an elbow injury, and Ellsbury is limping to the finish line after a statistically nightmarish season.  McCann has been a bright spot as of late, but had a miserable start to the year.

All year the Yankees have had difficulty scoring runs. Their team pitching has been surprisingly spectacular, which is the only thing that kept them from getting blown out night after night. They have the fewest home runs as a team since 1995 and the fewest team RBIs since 1981.

So what must the Yankees do to salvage next season and beyond? That’s the million-dollar question. First of all, it’s time to get rid of General Manager Brian Cashman. He has reigned over the Yankees offseason acquisitions since 1998 and has taken complete control since the death of long-time owner George Steinbrenner in 2008.  Hal Steinbrenner (son of George) should step up and lead the Yankees this offseason.  Derek Jeter is retiring at the conclusion of the season, putting an end to the core of Yankees who dominated baseball, winning four championships from 1996 to 2000.

Next on the list of people who should be fired is hitting coach Kevin Long.  Long has been doing his job for the Yankees since 2007. He’s widely accepted as one of the best hitting coaches in baseball, however, when a team struggles like the Yankees had in 2014, it’s time to make a change.

Once the Yankees clean house in the managerial and coaching departments, they need some offseason acquisitions and more specifically, they need offense. Dodger’s shortstop Hanley Ramirez will become an unrestricted free agent at the end of the 2014 season. Ramirez would be a great fit for the Yankees even though he’s had injury problems in recent years. Also with Jeter retiring, the Yankees could use a solid hitting shortstop to fill his shoes. Next, Alex Rodriguez is set to return in 2015. Rodriguez is a year removed from playing baseball and five years removed from producing a solid offensive season.  With that said, the Yankees need to make a bid at Nelson Cruz. Cruz is a power-hitting left fielder and would do wonders for the Yankees offense.

Sadly the free agent pool is not great this offseason.  But the Yankees have their own players who need to be re-signed.  Signing late season pick-ups Chase Headley and Brandon McCarthy will be key to making a playoff run next year. Re-signing their closer, David Robertson, and starting pitcher, Hiroki Kuroda, will help the pitching staff out as well.
Money is no issue for the New York Yankees. They must spend money to sign key players and squeeze out a few more wins next season. If they perform to their abilities, the Yankees will once again compete for a World Series title in 2015. 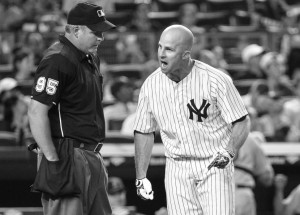