As SUNY Oneonta celebrates its 125th year of existence, the Greater Oneonta Historical Society also celebrated the grand opening of its exhibit on the history of the school on Friday, September 19, featuring Dr. Ben Beach, Mary Lynn Bensen, Elisa DeAndrea, Lyndsie Robinson and Anne Winchester. Their exhibit included both chronological pieces and highlights of certain elements of the school’s past, such as its humble beginnings as the “Old Main” Normal School, historical accomplishments of past alum and professors and new and old traditions. Complete with pictures dating back to the Old Main era of the school (late 1800s) and physical documents and books from various time periods of the school’s history, the dazzling exhibit gave its viewers an informative and entertaining historical overview of the school’s past.
“The greatest challenge in putting this exhibit together was just choosing what to show,” says Head Librarian Beach. “We had a real issue with chronological versus thematic presentation. We eventually chose thematic so that we could highlight the parts we thought were most interesting.”
With this strategy in mind, the Historical Society librarians allowed themselves to mold several portions of their exhibit into interesting perspective exhibits featuring the viewpoint of the Oneonta student throughout history.
“My favorite part of the exhibit,” quotes Robinson, “has to be the historical books we have on display by Cary G. Brush, who was a former professor at the school.” These books are also available at Milne Library on campus. In retrospect, Beach also added that “If we could have added anything to the exhibit, it would have been ghost stories of Oneonta. However we didn’t really have pictures for that, so we had to leave it out.”
The Oneonta Historical Society, founded in 1939, functions from the Oneonta Historic Center, located at 183 Main Street. With about 300 members and close association with Phi Kappa Si, the society is dedicated to promoting Oneonta’s rich heritage through educational experiences and use of authentic objects and stories. The building, which the society functions in is one of these objects in itself, being that it is the oldest brick building on Main Street, constructed in 1865. The society has resided in this building since 2004 and hopes to continue offering educational exhibits and programs in the future in order to offer more historical information to the Oneonta community.
The Historical Society offers three to four exhibits per year, including a holiday exhibit on the train system and an exhibit in February, titled “Lost Oneonta,” with dates to be announced. The 125th Anniversary exhibit will be open to the public through November 8. Professor Benjamin Dixon of Oneonta’s Geography Department will be giving a talk on the history of the institution. However, the librarians of the society, along with president Bob Wazowski, would like to encourage any members of the Oneonta community who are interested in the history of the school to make an appointment to view additional documents and sources related to the subjects of this exhibit any time. 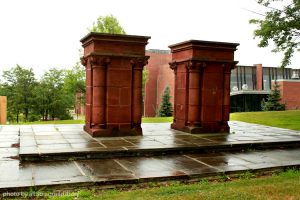